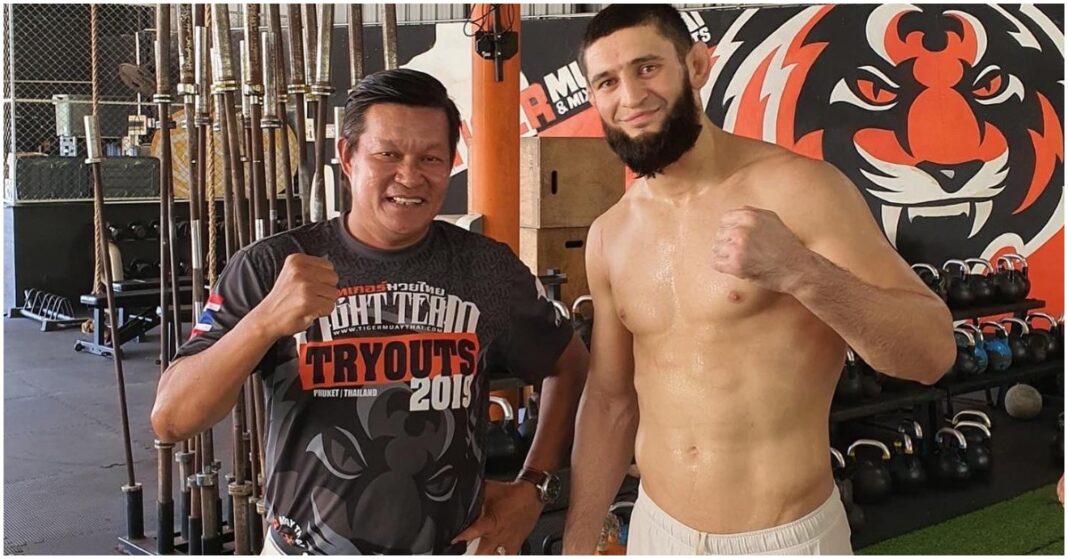 Khamzat Chimaev, one of the fastest rising stars the sport of MMA has ever seen has gotten even scarier.

Chimaev, the 11th ranked Welterweight has been making appearances at Tiger Muay Thai in Phuket, Thailand, a gym that has housed former and current world champions such as Israel Adesanya, Valentina Shevchenko and Alexander Volkanovski.

According to Sayat Abdrakhmanov, the gym is currently hosting a lethal group of fighters including Petr Yan, Rafel Fiziev, Marlon Moraes, Yaroslav Amosov and many others.

While Chimaev does not have his next opponent booked yet, it’s clear the 27-year-old budding star is eager to get back into the octagon in what will be a high-profile fight next, potentially against the #2 ranked welterweight in Gilbert Burns.

On his YouTube channel Chimaev elaborated on his thoughts about Burns,“I like this guy, actually. He’s a funny, nice guy. I want to fight with him. But in war, brother, I can’t be nice with somebody. I want to eat everybody. Take my money. Take my belt. I’m so hungry. When I talk about fighters, I’m hungry. I hope I will fight in Brazil, as well. Nice country. Nice people.” (h/t MiddleEasy)

The prospect of Chimaev getting better and improving at Tiger Muay Thai should be a scary one and something that puts the welterweight division on high alert. This star is coming and he is rising very quickly.

What do you think of Khamzat Chimaev training at Tiger Muay Thai?