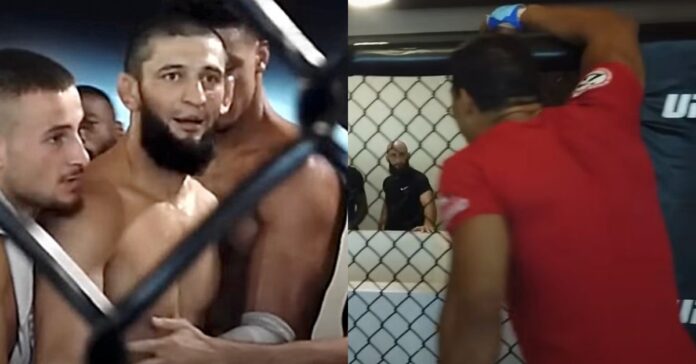 READ MORE:  Darren Till tells Chael Sonnen to "Shut the f**k up" in regards to UFC 282 injury rumors

With tension at its peak for Chimaev ahead of his pivotal matchup against Diaz this weekend at the T-Mobile Arena, footage has emerged of the duo sharing some words in a heated verbal battle at the UFC Performance Institute, with Costa offering to fight Chimaev in the future.

Replying to Costa, Chimaev, now irate and being held back by members of his team including UFC light heavyweight staple, Ilir Latifi, says, “I want to f*ck you up now p*ssy boy. Brazilian p*ssy.”

“What happened with Israel (Adesanya)?” Khamzat Chimaev asked. “He f*cked your ass, yeah? I’m here now, you said you were going to f*ck me up. You’re a p*ssy now.”

Responding to the entire altercation with Chimaev, Costa called the Chechen-born contender denied Chimaev’s so-called status as a “real gangster” – backing Diaz to win this weekend.