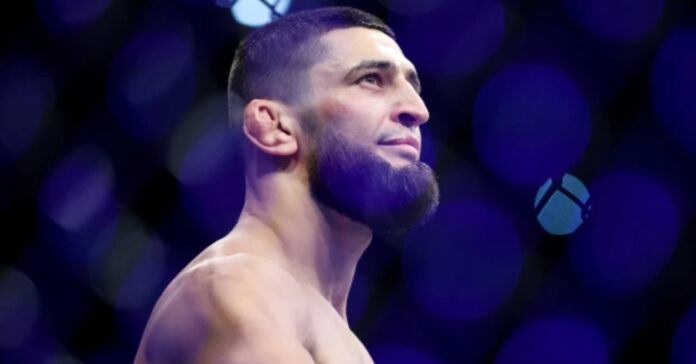 Ahead of his upcoming UFC 279 headliner this weekend against Nate Diaz, undefeated welterweight contender, Khamzat Chimaev has claimed he is “motivated” by the prospect of earning his first substantial payday in professional mixed martial arts with a victory in ‘Sin City’.

Chimaev, the current #3 ranked welterweight contender, featured on the main card of UFC 273 back in April of this year most recently – defeating one-time title chaser, Gilbert Burns with a close, unanimous decision victory.

As for Diaz, the Stockton veteran has been sidelined since June of last year at UFC 263, suffering a unanimous decision loss to recently minted division champion, Leon Edwards. This weekend’s outing will also mark the completion of Diaz’s contractual obligations with the promotion as he is expected to leave the UFC off the back of the T-Mobile Arena event.

Featuring in a recent sitdown interview with ESPN MMA reporter, Brett Okamoto ahead of his first organizational headliner, Khamzat Chimaev insisted he was “motivated” by the prospect of earning the biggest payout of his UFC tenure to date.

“Yeah, I never made that much money in all my career – or my life,” Khamzat Chimaev replied when asked if UFC 279 will come as his biggest payday. “It feels kinda amazing. (I’m) more happy, like more motivated – yeah, it feels good.”

Attempting to earn a first title challenge under the promotion’s banner with an expected victory over Diaz this Saturday night in Las Vegas, Nevada – Chimaev has echoed claims that he will arrange the veteran’s “funeral” for the UFC come the culmination of their welterweight headliner.

During his Octagon tenure dating back to July 2020, Chimaev has defeated John Philips, Rhys McKee, Gerald Meerschaert, and event co-main event feature, Li Jingliang, to go with his April judging win against Burns.