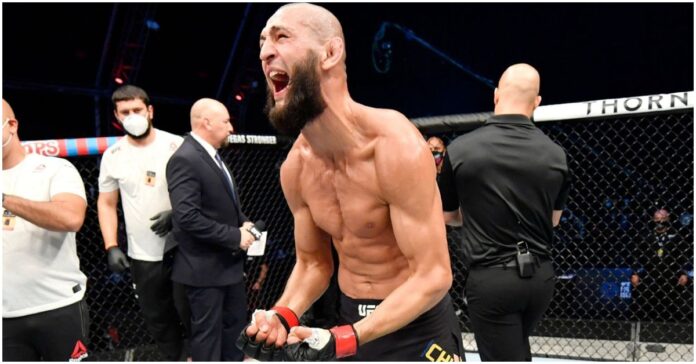 Khamzat Chimaev believes Kamaru Usman has been helping Gilbert Burns prepare for this matchup at UFC 273 because he is worried.

This matchup is highly anticipated with many people itching to see whether Chimaev can compete with the elite in the division and throw himself into title contention. ‘Borz’ spoke to TMZ Sports before his matchup this weekend to discuss his future within the UFC. Although this is a good opportunity for Usman to get a look at Khamzat Chimaev in action against better competition, the undefeated fighter does believe he is only really in his corner of Burns because he is scared.

“I feel sorry for both those guys. I’m gonna smash the guy and punch his face and his best friend will be standing there in the corner and make him scared as well, ya know,” Chimaev told TMZ.

Usman won’t be directly in the corner of Gilbert Burns when the pair meet however the Brazilian fighter will be accompanied by Vicente Luque. Although Khamzat Chimaev knows that Usman will be rooting for Burns to get the job done.

“Of course, cause he’s afraid. They push him down under me, you know, because he’s scared, that’s why. That’s why he wants to stop me before I come for him.”

Khamzat Chimaev currently sits ranked 11th in the welterweight division so a win over the second-ranked competitor in the division will catapult him forward in the division standing and for what he believes straight into a title shot.

“Of course. The guy number two in the division that’s why I smash him, what are they gonna do? After that, they have to fight me.” (Transcribed by TMZ)

The pair bumped into each other in the fighter hotel but it remained nothing but respectful during the interaction.

Fans do not have long to wait now before UFC 273 is here with us and we can finally see whether Chimaev can live up to his potential.

Who do you believe wins on Saturday? Chimaev or Burns?