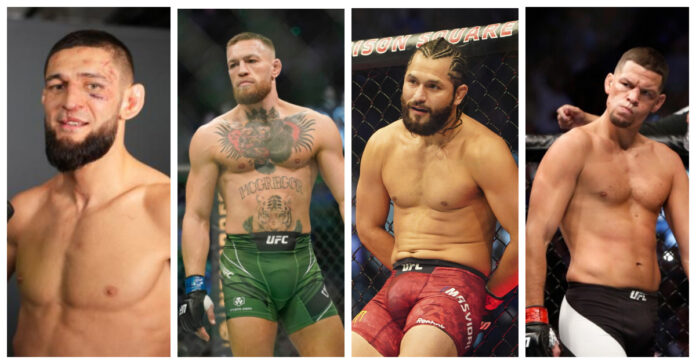 Khamzat Chimaev has taken aim at the biggest draw in the sport, Conor McGregor.

UFC welterweight Khamzat Chimaev broke through the top ten divisional rankings with a win over the former title challenger Gilbert Burns at UFC 273. Chimaev jumped up nine spots to the second rank following a close-fought battle with ‘Durinho’ that saw his first fight go the distance.

Now that he’s likely just a step away from the title shot, the 28-year-old fighter is looking to be matched up with the right opponent.

Chimaev has not been shy to call out his fellow competitors in the promotion regardless of their weight class. ‘Borz’ rallied for his next fight to be against the top contender Colby Covington, who his coach Andreas Michael of Allstars also believes to be the right step up in competition.

However, Covington may not be available in time due to the ongoing legal proceedings with Jorge Masvidal. Another potential opponent who Chimaev has been trading verbal jabs with is Nate Diaz, who’s also on the last fight of his contract. It seems like Chimaev also has two of the biggest draws on his radar, Conor McGregor & ‘Gamebred’ respectively.

Considering the uncertainty of how these megastars are going to be matched up ahead, Khamzat Chimaev posted an image on his Twitter to call out each of the four men with a skull emoji next to their names.

He captioned it with his nickname, ‘Borz’, next to a smiley emoji with a cowboy hat on to represent himself as the victor of an old-fashioned duel, as can be seen in the image.

‘The Notorious’ has traditionally competed in lighter weight classes at featherweight and lightweight but also has experience at 170-lbs. McGregor is swift in recovery from the broken fibula he suffered at UFC 264. He looks jacked when compared to his past self and has indicated a return to welterweight in his comeback fight.

While this could line him up against Chimaev, it is highly improbable that the UFC will match them up considering the risk as well as the fact that McGregor would rather fight UFC Welterweight champion Kamaru Usman for the title.