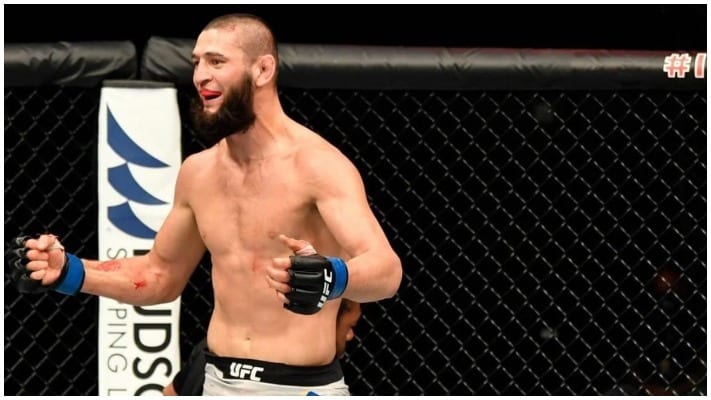 Khamzat Chimaev is the UFC’s newest big star, as he’s gone 2-0 in just ten days since making his debut back at UFC Fight Island I. He absolutely mauled John Phillips in his promotional debut, out-striking his 124-2 in total strikes, and securing the D’Arce choke finish in round two. Ten days later, at UFC Fight Island III, he went down to his natural weight class of 170 lbs and TKO’d Rhys McKee in round one, out-striking him 68-0 in total strikes. Chimaev’s one of the most dominant fighters in the entire sport already, and he’s only 8-0 as a professional.

Following his win over McKee, at the post-fight press conference, he was asked if Donald Cerrone was still a fight he wanted. He has the following to say on this matchup:

“Yeah (he has a) good name, but I know this guy’s not (on my) level. I’m going to smash him for one (or) two rounds. I’m gonna beat him easy, easy money for me, but he have good name, I’m only two fights in the UFC.”

Chimaev responded to ‘The Notorious’ with this statement:

Dillon Danis also took to social media to say something about Chimaev, though he’s in Bellator. Too bad the UFC won’t do cross promotion fights, because this would be very interesting to see. Danis might only be 2-0 at this point in his career, but he’s one of the best grapplers in the sport, as Chimaev also appears to be, and they only have a combined total of ten fights.

Chimaev also called out Demain Maia following his win on Saturday, stating that he respects him and sees him as a legend, stating ‘sorry, you’re next…. let’s see who have better grappling…’. Maia is one fight away from retirement, but this would be an interesting match up. Anybody versus Chimaev right now is an interesting match up, he’s so dominant and dangerous already. He stated he wants to become a two-weight world champion, welterweight and middleweight, and he thinks he’ll be fighting for the title in one or two years.

He also said he’d like to compete again at UFC 252 on August 15, and Dana White said he’d make it happen. How crazy would that be, to go from 6-0 to 9-0 in exactly, to the day, one months time? Making his UFC debut and going 3-0 inside of a month would be insane, he already broke a record for two fights, and two wins in ten days. Hopefully, they can make it happen and we get to see him again, he’s incredibly entertaining to watch. He really is just like a lankier version of UFC Lightweight Champion Khabib Nurmagomedov.

What would you like to see be next for Khamzat Chimaev?