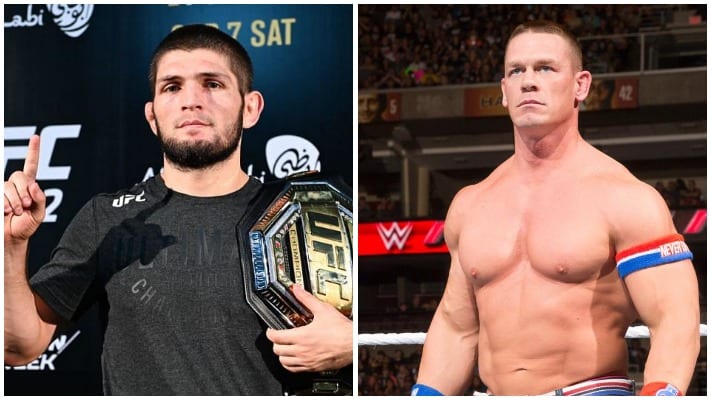 ‘The Eagle’ surprisingly retired from the sport back in October after beating Justin Gaethje to unify the UFC’s lightweight division.

After months of uncertainty as UFC boss, Dana White tried to persuade the undefeated Russian to stick around, Nurmagomedov relinquished his 155lb belt last month, cementing his decision to retire. Charles Oliveira and Michael Chandler are set to square off for the vacant title at UFC 262.

The 32-year-old is in his fighting prime and still appears to have a lot to give as an athlete. However, as of late he has been focusing on the athletic endeavours of others. Nurmagomedov has been coaching fighters and he now on his own promotion – Eagle Fighting Championship.

During a recent interview with TMZ Sports, Nurmagomedov’s manager was asked about the possibility of his client transitioning to professional wrestling.

“Any of these soft steroid freaks wants to go ahead and have a wrestling match with Khabib, they want to get beat up for real. They know who to call. They need to call me,” Abdelaziz said. “He’ll go there and he’ll smash John Cena’s face no problem.”

Do you want to see Khabib Nurmagomedov compete in the WWE?