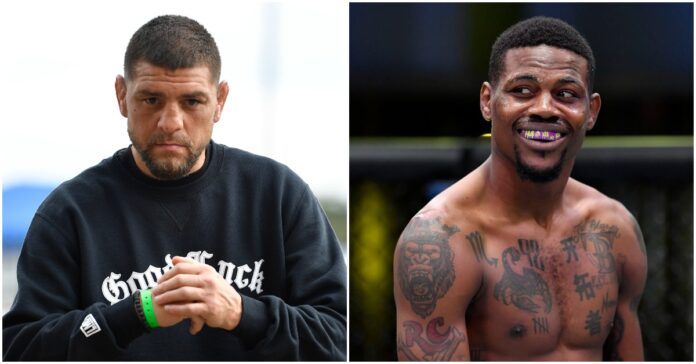 Kevin Holland recently told a story about a funny moment between him and MMA legend Nick Diaz.

Holland, who we last saw in a bout that ended in a no-contest because of an accidental headbutt between him and Kyle Daukaus, is known for saying some outlandish things at times. This time it seems like all that Holland did to provoke Diaz was wear the same shirt as him.

He explained to Helen Yee in an interview how it all went down at his Dana White‘s Contender Series fight back in 2018. (H/T sportskeeda.com)

Holland seems to brush the whole situation off. He did refer to Diaz as the ‘GOAT’ so there does not seem to be any ill will toward the elder Diaz brother. Holland has been calling Nick Diaz out for a fight in 2022.

“Some of you guys out there looking for a retirement fight, I’m your guy. I’ll strike with you.”

This is not the first time that he as called out Diaz for a fight. He posted on his Instagram not to long ago a clip of his using Diaz signature move, The Stockton Slap, on the Contender Series fight where in altercation took place.

According to The Score, “The Trailblazer” wrote in a text message about his desire for this fight to happen sometime next year.

“I been waiting to slap the slap man since I was on Contender Series. We had a little run in. I think it’s a fight the fans will want the commentators to just shut up and listen to the punches landing and our mouths flapping.”

Holland was one of the fighters of the year in 2020. He won five fights in a row, with all but one ending in a finish of some sort. 2021 was not as kind of a year to Holland like the previous. He dropped two straight to ranked contenders Derek Brunson and Marvin Vettori. He then had the aforementioned headbutt against Daukaus in October. After that bout Holland stated that he plans on moving down a weight class to welterweight.

The full interview with Kevin Holland is available below.

Would you be interested in a fight between Kevin Holland and Nick Diaz?