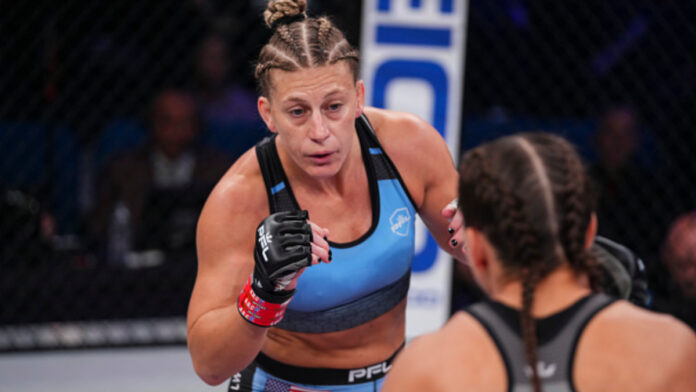 Ahead of the PFL playoffs where she looks to make history with a third-straight championship, Kayla Harrison sat down with us here at LowKick MMA for an exclusive interview.

She detailed her beef with Larissa Pacheco, mentioned how much she misses training with Amanda Nunes, and gave her prediction for how she believes the second fight will go with Julianna Pena.

“Maybe she (Amanda Nunes) got used to easy wins,” Harrison continued. “…Julianna is tough. You can’t take anything away from Julianna, she is a tough woman. I think that maybe when she (Nunes) didn’t knock her out right away, she was like: ‘Oh, sh*t’. Amanda’s not gonna make that same mistake twice.”

The first fight between Pena and Nunes was widely considered an easy victory for ‘The Lioness’ by media members and fans alike. However, people would be in for the shock of a lifetime, when Julianna Pena defeated Nunes in the second round, solidifying one of the greatest upsets in the history of any sport.

Now, the two fighters have been participating in the latest season of the Ultimate Fighter as coaches. History will be made again as the two are scheduled to face off on July 30th at UFC 277.

Do you agree with Kayla Harrison’s prediction on the Amanda Nunes vs Julianna Pena rematch?