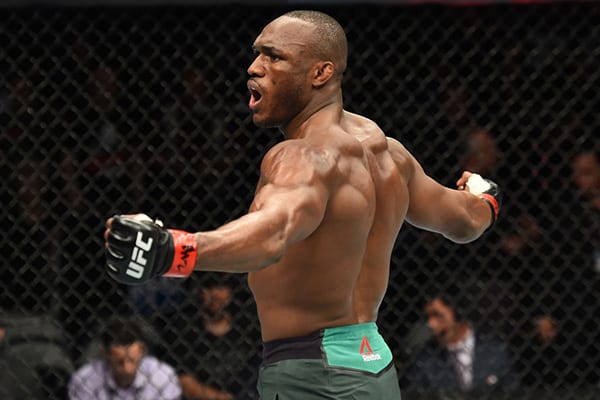 Usman made the announcement on his Instagram live story. The operation took place in Philadelphia, but it’s unknown as to what exactly the injury was that needed repairing (via MMA Junkie):

“I had knee surgery before, I thought this was going to be like that,” Usman said. “This ain’t that at all – at all. This (expletive) different.”

Usman revealed after his title win over Tyron Woodley at UFC 235 that he suffered a fractured foot shortly before the bout. He also mentioned that he plans on being an active UFC champion.

This surgery seems to be the first step in backing up that point. Now that he’ll be able to open up his arsenal following knee surgery, “The Nigerian Nightmare” says he’ll be “much more dangerous”:

“I’ve been on one leg for years now,” Usman said. “So to be able to open up and use my kicks will make me so much more dangerous, it wouldn’t even be fair once I start to use some of the weapons we work on.

Shortly after his title win, it was announced by UFC President Dana White that Colby Covington would be the man up next to challenge for the 170-pound crown. Covington and Usman have had their fair share of issues in recent weeks. Usman said he looks forward to making his first title defense against “you know who.”

MMA Junkie later corrected their story to update that Usman had underwent hernia surgery, not knee surgery. Usman’s manager Ali said surgery is not necessary for Usman’s knee as of now. A timeline for Usman’s return is uncertain as of now. Hernia surgery normally takes four to six weeks before fighters can being training normally.