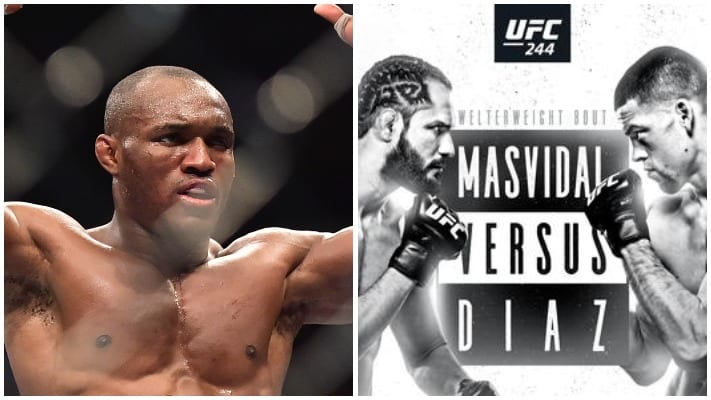 Kamaru Usman is clearly not a fan of the upcoming bout between Jorge Masvidal and Nate Diaz.

Masvidal and Diaz collide in the headliner for UFC 244 on November 2 in Madison Square Garden, New York. It will be a rare case of an event headlined by no UFC title fight. Instead, the two welterweights will compete for a one-off BMF title.

The BMF title has drawn a huge debate but majority seem to be alright with it just because they’re excited by the Masvidal vs. Diaz matchup. Usman, however, isn’t.

The welterweight champion was expected to defend his title against Colby Covington in the UFC 244 main event. Initially, both fighters couldn’t come to an agreement, so Masvidal vs. Diaz was booked.

Usman vs. Covington would be finalized later on as it will now headline the promotion’s end-of-year event at UFC 245 on December 14. But “The Nigerian Nightmare” believes the UFC dropped the ball in getting that fight made at MSG.

He also had some thoughts on the BMF title:

“They dropped the ball in getting my fight done for MSG,” he said at a recent media scrum. “They had to create something for that. They have 20 losses combined. You’ve got 20 losses? Sit your ass down. You’re not the baddest mother f*cker.“

What do you make of Usman’s comments?