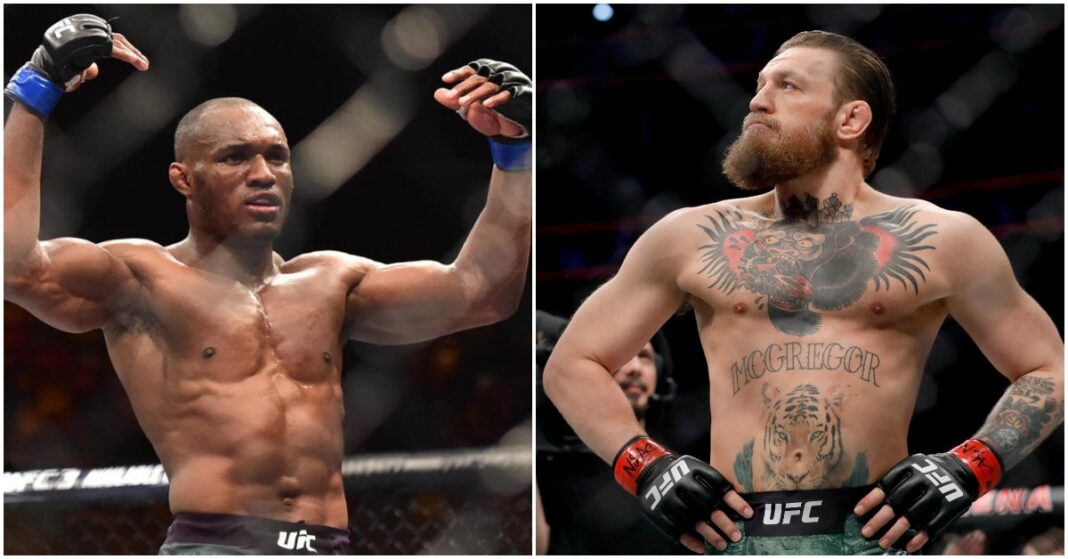 UFC Welterweight champion Kamaru Usman isn’t too impressed with the idea of Conor McGregor returning straight into a title shot especially against himself.

McGregor has expressed his interest is attempting to become the first three-weight division champion and aims to best Usman on his way to doing so, something Usman isn’t taking to very lightly.

“I don’t take anything that he says seriously because I understand he’s just a clout chaser,” Kamaru Usman told Sky Sports. “He’s just looking for clout.

It’s clear to see Kamaru Usman has no interest in Conor McGregor and his antics and believes the Irishman isn’t a worthy opponent for him.

“To be honest, the real competitor in me is like no, no f****** way. I wouldn’t even pay attention to him because I know what he’s doing, and I know where he’s at in his career.

“He hasn’t won a fight in a couple of years. Yes, those were tough fights, but it is what it is. If I had to fight Conor [McGregor], I would still feel the same way, that’s a top contender.

“Does he deserve it? Nobody deserves anything, so he shouldn’t sit there and say I should get this or I should get that. Myself and the company will set down and decide what makes most sense.

“Everybody is going to call me out, that’s what they’re supposed to do. It’s up to myself and the company to sit down and say ‘okay, this guy is worth it, ‘let’s go out and take him out next’.”

Kamaru Usman was quick to laugh off McGregor’s comments that he is just “a jab-happy, sloppy, orthodox wrestler with no submissions whatsoever” and revealed why he would come out on top if the pair do end up facing each other.

“You can ask [Gilbert] Burns how my ground and pound is and you can ask [Jorge] Masvidal how my sloppy boxing is!” Kamaru Usman said. “Everybody is going to have their opinions and everybody is going to say certain things. When you step in to the octagon with me, I am the judge, the jury and the executioner inside there and I will do as I see fit.

“People can hate that I’m not talking a bunch of trash and doing a bunch of b******t, but it is what is and they can hate all they want. When we step inside that octagon, I am the pound-for-pound king and each and every opponent will understand that.”

We will have to wait and see who is next for the current welterweight champion as he continues to recover from the hand injury he has sustained, although no date has been set Usman is in no rush to return and wants to ensure his body heals properly.

“The hand is getting better” Kamaru Usman stated.

“I still haven’t thrown a punch with this hand since my fight, so I’m just going to wait it out, make sure that I’m good and I’m healthy, then I can get back to my regular schedule of events. If this injury wasn’t here then I’d probably have fought two or three times already!

Who would you like to see Kamaru Usman face upon his return?