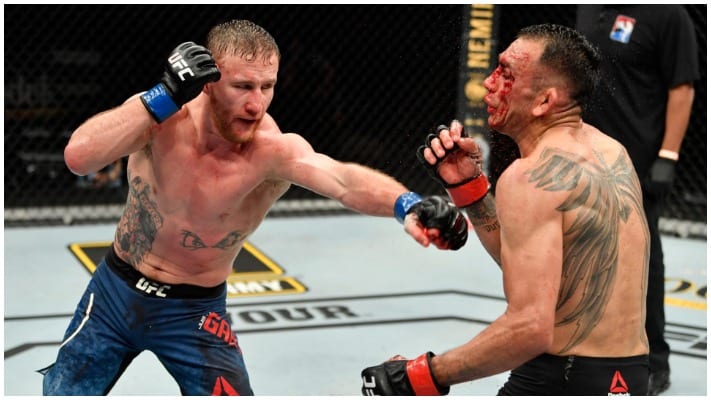 Justin Gaethje doesn’t think Tony Ferguson is done. However, he didn’t think the latter was an elite lightweight either.

Ferguson saw his 12-fight winning streak snapped at the hands of Gaethje after losing a fifth-round TKO in their UFC 249 headliner in May last year.

“El Cucuy” would then suffer his second loss in a row after getting comfortably outpointed by Charles Oliveira in the co-main event of UFC 256 last month.

While he lost to two of the best lightweights in the world, many observers felt Ferguson was slow and potentially past his prime — especially after the damage he took against Gaethje.

Gaethje had a different take on Ferguson, however.

“I mean, Tony has always been that man,” Gaethje told ESPN (via The Body Lock). “Guys constantly went in there and fought in the chaos and refused to create space. I don’t know why, [Anthony] Pettis and [Donald] Cerrone, these guys weren’t able to do what I did. But I think that was there the whole time.

It’s hard to agree with Gaethje’s claim, especially as non-elite fighters don’t go on 12-fight winning streaks in arguably the most stacked division in the UFC.

That said, “The Highlight” doesn’t believe the Ferguson who faced Oliveira was the same one that embarked on that streak.

“I was impressed with Oliveira but yeah, I don’t want to take anything away from him but Tony was not the same person,” Gaethje added. “No one’s going to be the same person after you get hit in the face that many times. Ever.

“You fight with less confidence and his confidence is something that made him so dangerous and his lack of confidence now is going to be a factor.”

What do you think of Gaethje’s comments?