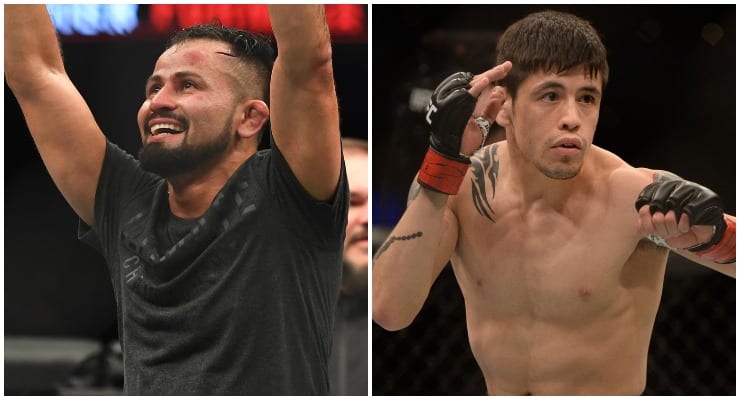 The UFC will make their first trip of the year to Brasil on March 14. In a press release on Thursday the company announced a handful of fights for the card which is starting to take shape. Jussier Formiga vs. Brandon Moreno was the pick of the bunch and will likely determine the next top contender at 125lbs.

The 34-year-old Formiga had been riding a 4-fight win streak, holding wins over the likes of Segio Pettis and Deiveson Figueiredo. However, that streak came to an end in devastating fashion last time out. Jospeh Benavidez earned his shot at the vacant 125lb title by landing a flush head kick and a bunch of follow up strikes to take out Formiga inside two rounds. He’ll now look to get back in the mix at 125lbs by taking out Brandon Moreno.

Since being amazingly released by the UFC last year Moreno has been in excellent form. The 26-year-old won the LFA flyweight title in his first fight outside the octagon before being recalled to the UFC. Once there he has provided value for money in two great fights. The first was scored a draw but Moreno can count himself unlucky not to have got the judge’s decision. However, he would leave no doubt in his recent fight with Kai Kara France. He picked up the decision on all three scorecards and ended the Australians 8-fight win streak in the process. He now gets a quick turnaround at UFC Brasilia.

Alongside this matchup the UFC also announced a bantamweight fight between Rani Yahya and Enrique Barzola. In the women’s bantamweight division, Veronica Macedo will face Bea Malecki.

As of right now the card is still without a main event. Although it is taking shape, see below for every fight the promotion have announced for UFC Brasilia on March 14.