LowKickMMA.com
Home MMA News Julianna Pena Would Like To Have A Match With Ronda Rousey 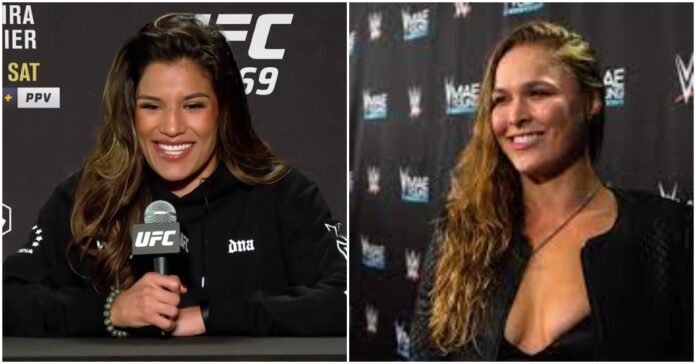 Women’s bantamweight champion Julianna Pena already has a few names she has been throwing around for her upcoming title defense.

Ronda Rousey is now on that short list, as she would love to bring the former UFC champion out of retirement for a grudge match. Rousey has not fought inside the UFC since her comeback fight against former champion Amanda Nunes. Nunes made quick work of Rousey in her comeback, as she TKO’d her in the first round.

Julianna Pena had a lot to say about Ronda Rousey in an interview with the NY Post.

“She really had a tough time getting along with me on The Ultimate Fighter. She didn’t like me at all because I was friends with Miesha Tate. She wasn’t the nicest. It would be amazing to pull Ronda Rousey back out of retirement,” Peña said. “It would be great to have her come back to UFC and fight again.”

Rousey has been out of the UFC since 2016 and lost her last two fights to Nunes and Holly Holm. She was a pioneer for women’s MMA and was the most dominant women’s fighter for many years. She started her professional MMA career 12-0, with 11 first round finishes.

Pena on the other hand just defeated Nunes in one of the biggest upsets in MMA history. Mostly everyone had Nunes beating Pena and many analysts and fans alike believe that Nunes is the greatest women’s fighter of all time. Pena is eyeing up a few fighters for her first title defense, but a rematch against Nunes is most likely what makes the most sense. Rousey coming out of retirement is a stretch, as she has recently had a baby with her husband and former UFC fighter Travis Browne.

Would you like to see Rousey and Pena face-off in a match?