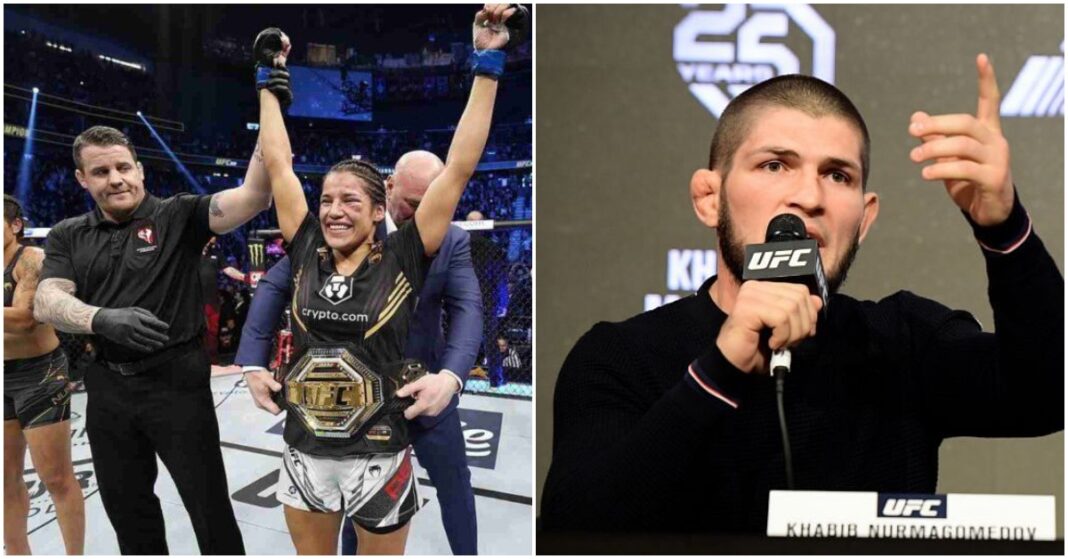 UFC Women’s Bantamweight Champion Julianna Pena should have been basking in celebration following her win over Amanda Nunes at UFC 269. However, it seems the new champion was hurting more than celebrating after hearing comments made by Khabib Nurmagomedov on the state of women’s mixed martial arts.

Pena pulled off one of the biggest upsets in sports history when she submitted Amanda Nunes in the second round to claim the bantamweight strap, a task that is certainly not easily achieved. Whilst many showed delight for her, there was one man who wasn’t impressed with the performance: former UFC undefeated lightweight champion Khabib Nurmagomedov.

In a press conference for Eagle FC Khabib played down Pena’s achievement and took a jab at the level of competition currently in women’s mixed martial arts.

“I am like, we can watch what Julianna Peña did with Amanda Nunes (at UFC 269). But Julianna Peña, she is not like the greatest or something like that. She just beat Amanda Nunes like (on the day). We can watch not many good (female) fighters all around the world. There are only like five or six of them.”

Pena hadn’t responded to Khabib’s comments yet until she made a recent appearance on the Joe Rogan Experience Podcast, this is what she had to say.

“I saw in a presser that they asked [Khabib] a question and he was just completely downgrading the whole win and everything like that….it totally broke my heart…”

“He must be friends with Kayla Harrison or something. I don’t know. Because he was like, [MOCK KHABIB ACCENT] ‘If this is the top of women’s division, it’s a joke, I mean, it wasn’t very nice. I didn’t appreciate it, Khabib.” (Transcribed by MMA News)

It appears Pena hasn’t yet been given the respect, she deserves from Khabib, however if she is successful in her first title defence against Nunes people won’t have much choice but to give her the respect she already deserves.

What do you make of Khabib’s comments towards Julianna Pena?