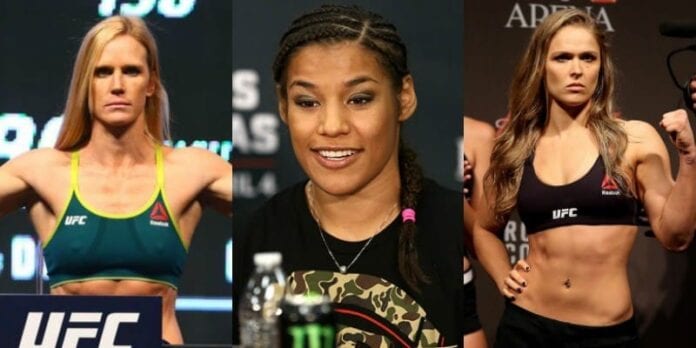 No. 4-ranked UFC women’s bantamweight contender Julianna “The Venezuelan Vixen” Pena has made it clear that she would like a title shot next after stringing together four straight UFC wins, most recently scoring a decision victory over former title challenger Cat Zingano at UFC 200. One contender who may challenger Pena for that next title shot, however, is No. 7-ranked Valentina “Bullet” Shevchenko, who scored a dominant decision victory over former champion Holly Holm in the main event of this past weekend’s (July 23, 2016) UFC on FOX 20.

Pena wasn’t too surprised that Shevchenko beat Holm, however. “The Venezuelan Vixen”, who appeared on today’s (July 25, 2016) edition of The MMA Hour, said that ‘harmless’ Holly has been ‘overrated’:

“No, I wasn’t surprised. I’ve been saying for a while now that harmless Holly couldn’t hurt a fly, especially in a five-round fight. It’s just a little nickname. She was a little bit overrated, she got thrown into the mix and got into the top 10 after beating up some people that have not been around as long. So I think she got a little lucky with the choices of opponents that she’s had.”

Aside from Pena and Shevchenko, former longtime bantamweight queen “Rowdy” Ronda Rousey could also receive the next shot at gold if she does indeed decide to make her long awaited return after being shockingly knocked out by Holm last November. Pena also took the opportunity to take a shot at Rousey, calling the former titleholder a ‘one-trick pony’:

“I just know that the division has been changing a lot more now that Ronda is not the champion and I knew this was going to happen after that. Just because I feel Ronda is a one-trick pony who has been able to rack up all these wins and be so dominant, I knew the second she lost, it would be an open division for the rest of us. And once she was exposed, that it would be harder for her to get back in there and then second off, get back in there to win her belt. It’s good for the other girls to show the world that there are other 135-pound women out there other than Ronda Rousey.”

Who do you believe should receive the next crack at newly-minted 135-pound champ Amanda Nunes?