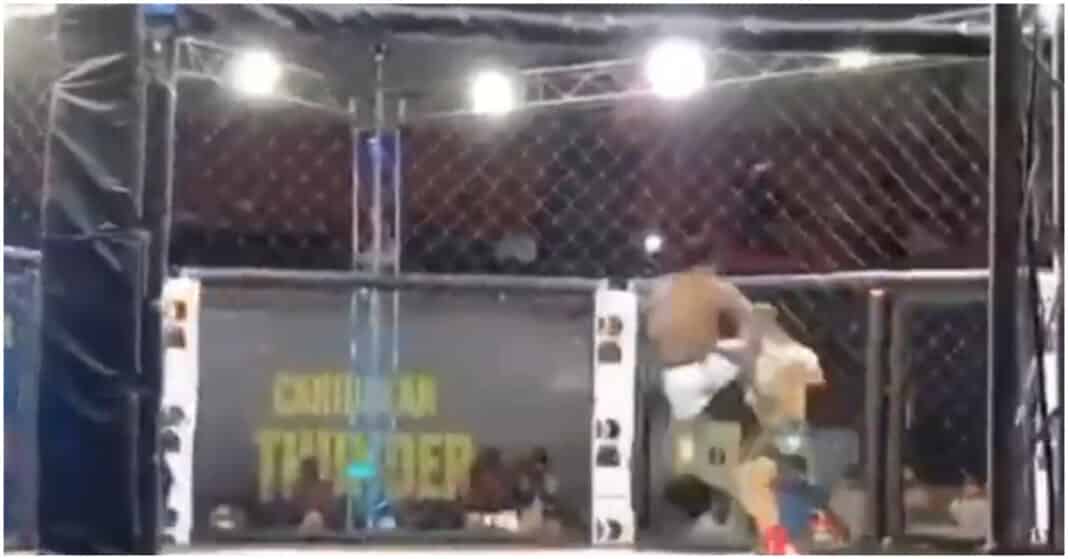 They say that imitation is the sincerest form of flattery.

On Monday, ‘Gamebred’ shared a clip on his social media of a regional fighter named Elias Santos landing a flying knee on his opponent.

The knee was very similar to Masvidal’s flying knee that knocked out Ben Askren in five seconds at UFC 239 back in 2019. The knockout is still the fastest in UFC history and may never be broken. It is regarded as one of the best knockouts of all time.

Before Santos went flying across the cage, the person recording the video said, “Masvidal flying knee, he’s on the show right now, guys. So be ready.”

And ready we were. Santos landed the perfectly placed knee and followed it up with some ground and pound until the referee saw enough.

Not much is known about the regional fighter, and as of now, the knockout is not recorded on Tapology.com or Sherdog.com. His opponent and the promotion are not known either. Santos currently holds a 3-4 record (with the flying knee KO) and fights out the Dominican Republic.

As for Masvidal, he has a fight booked for UFC 269. It is a grudge match, two years in the making. He fights Leon Edwards, the man he infamously punched backstage after knocking out Darren Till at UFC Fight Night: Till vs. Masvidal.

After Masvidal punched Edwards, he gave an interview with ESPN reporter Brett Okamoto to which he called it a “three-piece and a soda.”

Masvidal is riding a two-fight losing streak, with two losses to current champion Karamu Usman and was knocked unconscious for the first time in his career earlier this year in April.