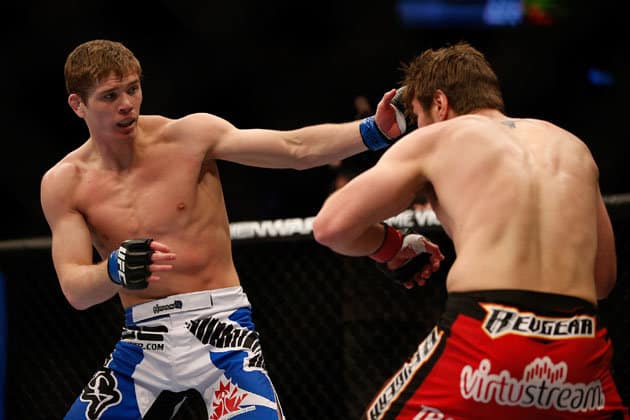 When Frankie Perez immediately retired from fighting his impressive first-round KO win over Sam Stout at last Sunday’s (August 23, 2015) UFC Fight Night 74, the odds were probably in favor of the East Coast native being the only fighter to do that this week.

However, he’s not the only one.

News arrived on UFC Tonight that 25-year-old welterweight Jordan Mein has decided to hang up his gloves as a professional fighter, calling it quits with an impressive 29-10 record intact:

Jordan Mein has chosen to retire from being a pro MMA fighter. He ends his career with a 29-10 record.

Starting his career with a submission loss to Rory MacDonald at the ripe age of 16 in 2006, the Canadian Mein has been in the UFC since his TKO win over veteran Dan Miller at March 2013’s UFC 158. He racked up a decent record under the Zuffa Banner in UFC and Strikeforce, winning five of his eight bouts with three stoppages while only losing to top opposition like Tyron Woodley, Matt Brown, and Thiago Alves.

It’s worth noting that Mein famously had both ‘The Immortal’ and Alves in serious trouble during the respective bouts. “Young Gun” battered Brown with some vicious elbows at UFC on FOX 7’s “Fight of the Night,” only to see the gritty Cleveland brawler return fire with a relentless onslaught of his own to earn the stoppage.

Mein was also having his way with Alves in the first round of their match at January’s UFC 183, but got a bit cocky and was finished off by a vicious body kick.

That apparently will end up being Mein’s last UFC bout and last MMA bout altogether, as he’s retired to pursue other interests. Recently, the UFC’s new Reebok uniform sponsorship deal has brought the always-discussed issue of low fighter pay into a much more public and scrutinizing light.

Are young fighters quickly realizing that the toll fighting takes on one’s body isn’t worth the shockingly low rewards and uncertainty of the UFC, or are Mein and Perez just unique competitors who had enough?