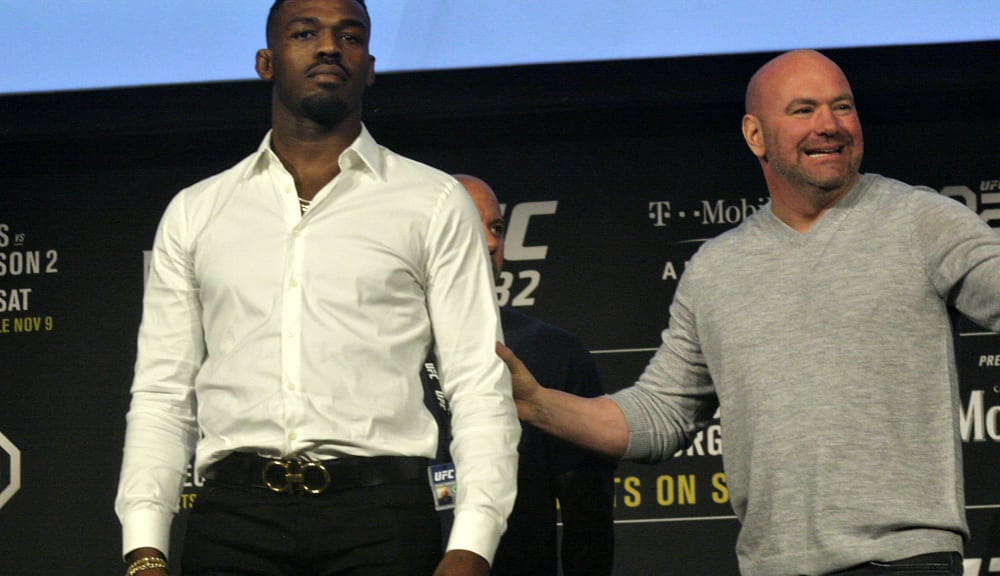 Jon Jones is not happy with UFC boss Dana White after he dubbed Lightweight Champion, Khabib Nurmagomedov to be up there with the greatest of all time following his second round submission win over Justin Gaethje at UFC 254. (H/T BJ Penn)

The former UFC Light-Heavyweight Champion had also picked Gaethje to win by KO before the fight.

Khabib then shocked the world by immediately retiring after the fight saying he ‘promised his mother he would not fight again.’ Khabib also asked to be recognised as the pound for pound number one fighter on the planet, something that Dana White backed up at the post fight press conference.

“He is the number one pound for pound fighter in the world and seriously you have to start putting him up there at ‘GOAT’ status.”

Jones praised Khabib following the win on Twitter, writing to his 2.4million followers, he said: ‘I want to congratulate Khabib for an outstanding career. I know he made his father along with millions of fans around the world incredibly proud today. May God continue to bless him on his journey.’

However Jones then went on to play down claims that Khabib was the greatest martial artist of all time, comparing his 15 wins in world championship fights to Khabib’s 4.

Jon Jones continued with a series of tweets in which he also claimed that he was going to ‘just ask for the heavyweight championship to see if they give it to him’ stating that fighters can now ‘just ask for things.”

Jon Jones has not fought since he beat Dominick Reyes at UFC 247 in February. He has also since vacated his Light-Heavyweight title and been involved in a public dispute with the UFC over negotiations about the Jones moving up to Heavyweight.

Jones had originally retired this year after he believed he was not being paid enough for the potential move up to heavyweight, something he felt he had been promised.

However Jones has since declared he will fight at Heavyweight after having positive conversations with the company despite Dana White saying Jon Jones will not receive a title shot before Francis Ngannou.

Jon Jones has never lost a championship fight and he believes that a title at heavyweight will be enough to cement his name as the greatest of all time.

Do you believe Jon Jones is the greatest MMA fighter of all time?