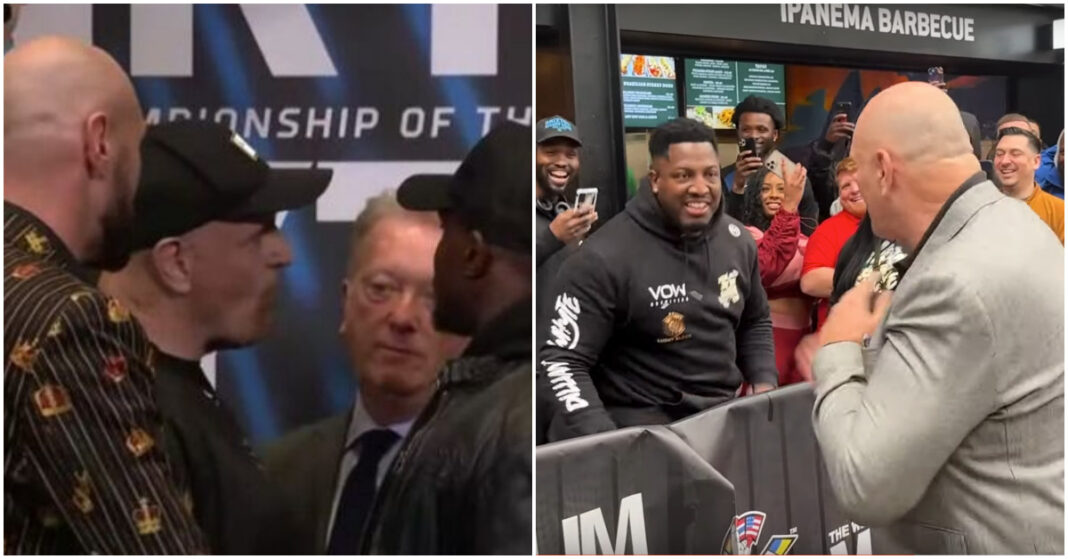 John Fury seemed to put aside his differences with Dean Whyte as the two men shadow boxed each other in front of a roaring crowd.

At the Tyson Fury vs. Dillian Whyte press conference yesterday, John Fury and Dean Whyte nearly came to blows amidst the rising heat of the upcoming fight. They got into an altercation that needed the combined efforts of the 33-year-old fighter and Whyte to keep the 57-year-old John back from going all guns blazing.

In a recent video uploaded to The Mac Life, it seems like the two have made up now just a day before the fight takes place at the iconic Wembley Stadium in London, UK.

While the audio isn’t clear enough to hear what they’re saying, John Fury, can be seen exchanging some words with Dean Whyte before the latter gave him a thumbs-up as a sign of peace. The pair proceeded to shadow box to entertain the cheering crowd around them. Towards the end of the video, Whyte acknowledged Fury’s boxing abilities as he exclaimed, “You got skills man!”

The long-awaited match-up between WBC and The Ring heavyweight champion Tyson Fury and WBC interim heavyweight champion Dillian Whyte will finally go down this Saturday, April 23. ‘The Gypsy King’ has been picked as a significant favorite (-550) by the bookies compared to Whyte’s +400.

After defending his world titles against Deontay Wilder in their trilogy match, Fury comes off two successive wins over the former WBC heavyweight champion to take on his mandatory challenger Whyte. ‘The Body Snatcher’ was originally scheduled to defend his interim strap against Otto Wallin on October 30 but was forced to withdraw from the fight due to a shoulder injury.

Choosing not to reschedule his bout with Wallin, Whyte decided to take a shot at Fury’s world titles. There has been speculation regarding the winner potentially facing the victor of Anthony Joshua vs Oleksandr Usyk 2 in their next fight. While there have also been talks of a showdown with UFC heavyweight champion Francis Ngannou, Fury has stated his desire to retire after this fight leaving the sport unblemished with no losses.

Do you think Tyson Fury will retire after his fight with Dillian Whyte?