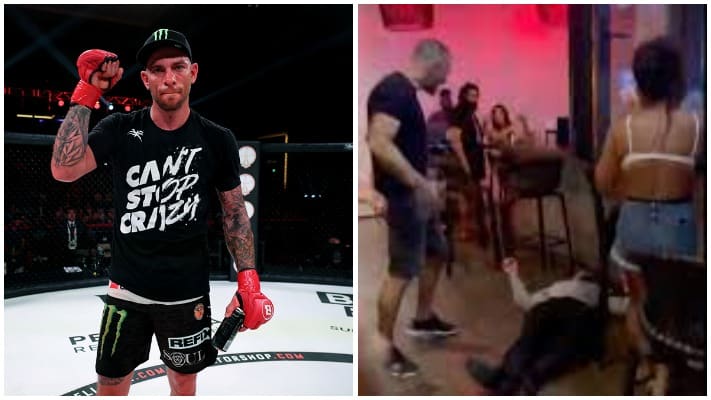 Bellator middleweight Joe Schilling is asserting that the bar patron he assaulted earlier this week deserved it.

A video surfaced showing Schilling punching a bar patron he bumped into, knocking the man out cold. Schilling seems to show no remorse for his actions as he walks away from the man and stunned bar patrons.

After the video surfaced, Schilling took to social media to give his version of events. In an exclusive with Hans Molenkamp, Schilling asserted that the bar patron, who remains unidentified, had been aggressive and racist throughout the evening leading up to the incident. (H/T Beyond Kickboxing)

“Little context… this guy’s rapping like an idiot. The busboy, who happens to be black, walks by and this idiot bumps into him and screams out ‘me and broke n****s, we don’t get along.’ The busboy is serriously offended, but doesn’t want to lose his job.”

He continued, “as the night goes on, this clown starts looking at me… I go outside to smoke. As I’m walking back, he bumps into me. I put my hand out to catch him, he immediately says sorry. You can see me nod my head like cool. Then he realizes it’s me, the guy he’s been rapping to all night and yells, ‘Hey!’ I turn around and he flexes on me … bad decisions are made everyday.”

“The busboy and DJ came up to thank me. As you can see from this video, when he flexed on me, I was scared for my life and simply defending myself against the evil in this world.”

In a subsequent Instagram post, Schilling shares screenshots of what are, presumably, messages from the bar patron’s ex-partner and a friend of the ex-partner claiming that the man was abusive. Schilling posted the screenshot and labeled it “The Lord’s Work.”

Not sure if we should consider Schilling’s post as a supplement to his original explanation or as a justification for his actions. However, the internet has tons of opinions regarding his actions that range from supportive of Schilling to calling for legal action.

More to this story is likely to unfold, and Low Kick MMA will keep you updated.

Do you think Joe Schilling was justified in knocking out the bar patron in the video?