LowKickMMA.com
Home UFC News Joe Rogan: They Booed The F*ck Out Of Donald Trump At UFC... 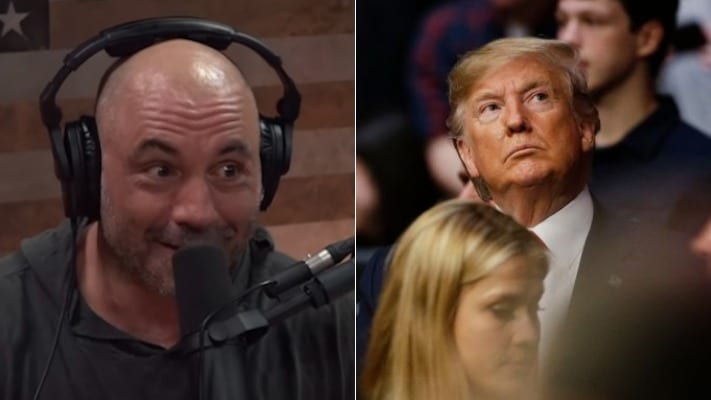 There was a lot of controversy and mixed reviews on whether or not United States President Donald Trump was cheered or booed at UFC 244 last week.

Trump was in attendance to watch the Baddest Mother F*cker Championship fight between Jorge Masvidal and Nate Diaz. According to UFC commentator Joe Rogan on his podcast, “The Joe Rogan Experience,” Rogan said the crowd “booed the f*ck” out of President Trump.

Rogan’s guest brought up Trump’s son, Donald Trump Jr., suggesting that there were people chanting “USA” for the President. However, Rogan was very clear that, while there were some cheers, the majority of the reaction for the President was negative.

“Maybe four people behind him were chanting USA,” Rogan said.
“Is that what Donald Jr. said? Listen, if that was your dad, you’d probably say that too. Look, they booed the f*ck out of him. I’m sure some people clapped. I’m sure. But if you had to bet your money on it, like what was the greater percentage?

“Was it boos or claps? It was f*cking boos. Dude, I took my headphones off, I was right there. I could’ve hit him [Trump] with a rock. He was right over there. It was ‘boo!'”

The longtime UFC commentator noted that fans love to boo, and that it’s fun for people to be negative in large crowds at sporting events.

“But, the reaction, when he walked in, was a lot of boos. But that’s just f*cking gonna happen, man. He’s a controversial character. Anywhere he goes he’s gonna get – it’s fun to boo. It’s fun to go ‘f*ck you!’ It’s fun.”

What do you make of Rogan’s report that Trump was badly booed at UFC 244?