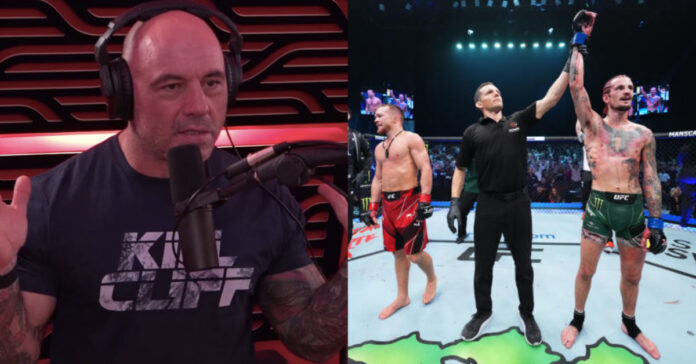 Joe Rogan has shared his opinion on the controversial scoring of this past weekend’s fight between Sean O’Malley and Petr Yan.

Although a new lightweight king was crowned at UFC 280, arguably the biggest story to come out of the event was the Yan Vs. O’Malley fight.

O’Malley would be awarded a split decision victory over Yan but many onlookers felt that Yan was the clear winner, igniting social media with claims of robbery.

While fans, media and fighters alike shared their opinion on the bout, Joe Rogan, who has worked with the UFC for almost two decades would take to his podcast to share his opinion.

“Takedowns without damage, what is that value?” Rogan questioned. “I’m not denying Petr Yan won, cause I did think he won the end of it. But takedowns without damage vs. standup with damage. ‘Sugar’ landed more strikes standing and had big moments. Yan had some big moments too. One big left hand that rocked him. The question is like, how valuable are those takedowns and how valuable is that top game in that control?”

“There’s several problems, but one of the problems is that I feel we were very limited by this 10-9, this 10 point must scoring system. Someone can win a round 10-9 and it can be a very close round and someone can win a round clearly and it could be 10-9. That doesn’t make any sense to me. The system is designed for boxing and it’s a good system for boxing. I don’t think it’s a good system for MMA.”

Rogan would also state that MMA needs its own scoring system, that the 10-9 system currently implemented doesn’t work and more clarity must be had to avoid situations like this in the future.

“I think MMA needs a much more comprehensive system,” Joe Rogan continued. “If a guy can hold you down with no damage at all for three minutes, vs. a guy who holds you down and damages you for 30 seconds, what’s worth more? What, hits you with three or four good hard shots? Is that worth more? If you spend the majority of a round on top of a guy, even if you’re not damaging him, how much is that worth? How much is a leg kick worth?

“I don’t think that’s the right system for MMA. I think it should be a completely different system. We just sort of adopted the boxing system.” (H/T Heavy)

Do you agree with Joe Rogan?