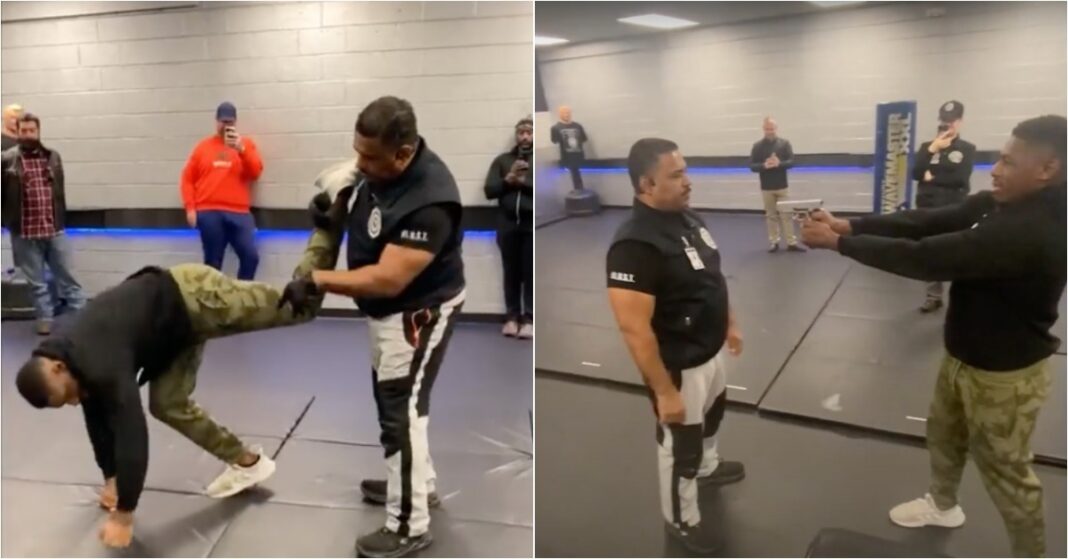 UFC middleweight contender, Joaquin Buckley recently shared footage of himself training alongside, Dale Brown from the Detroit Urban Survival YouTube channel, who is responsible for numerous viral videos in recent weeks, on how to defend yourself from armed combatants.

Buckley, who was slated to meet with fellow knockout artist, Abdul Razak Alhassan at UFC Vegas 46 this weekend, saw the bout fall to the wayside after the latter was forced from proceedings for reasons currently undisclosed. The bout is, however, expected to now take place at a UFC Fight Night event on February 28. instead.

The St. Louis native returned to the winner’s enclosure back in September at UFC Vegas 37, stopping Antonio Arroyo with a massive third round knockout. The victory earned Buckley a Performance of the Night bonus.

Posting a near-six minute video on his social media, Buckley, who appeared quite sceptical about the aforenoted, Brown’s ability as a self-defense instructor, was informed of the three main principles thought at Detroit Urban Survival: Escaping, controlling, and lastly, immobilizing threat.

Brown, from Detroit Urban Survival, then demonstrated on Buckley how a threat could be immobilized via a stomp to the assailant’s knee, an eye poke, or the crushing of his hyoid in his neck.

Equipping Buckley with a knife, Brown encouraged the 27-year-old stab him, before eventually disarming Buckley. Demonstrating a hip toss, Buckley, who was taken down onto protective floor mats, remarked, “it ain’t no joke”.

Armed with a handgun, Buckley was once more disarmed as Brown then reversed and pointed the gun at him – leading Buckley to wince in pain as his finger remained in the trigger guard, before jokingly asking Brown, “you want me to pay your bills?”

Buckley then finds himself in a similar position to his infamous Knockout of the Year of Impa Kasangany in July 2020, where he scored a breathtaking spinning back kick knockout, but rather than execute the kick once more in a similar position, Buckley appeared to be immobilized once again.

Rising to notoriety in recent months, Brown, who heads up Detroit Urban Survival had his fair share of critics who question both his approach, and the actual survivability and real-world application of the manoeuvres he is charging his students to learn.