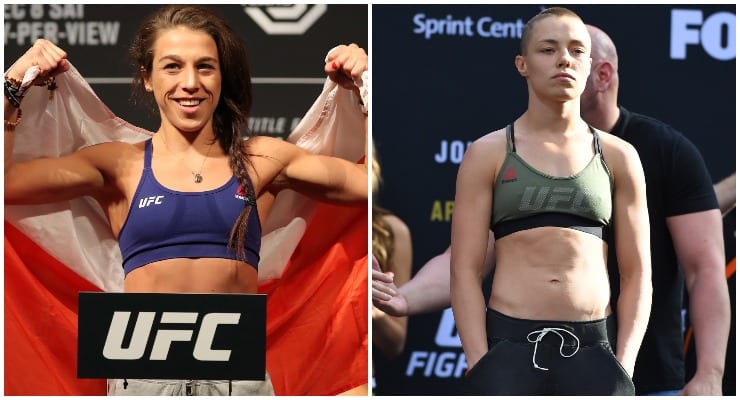 Former strawweight queen Joanna Jedrzejczyk has the chance to reclaim her crown at UFC 248 on March 7. The Polish powerhouse will meet current champion Weili Zhang in the co-main event. It will be the Chinese fighters first defence of the 115lb title she won against Jessica Andrade in 2019.

Despite realising the tough task ahead Jedrzejczyk has already begun thinking about her first title defence. The strawweight division is stacked with talent and plenty of worthy title challengers including the likes of Tatiana Suarez and Andrade. However, one particular fight is more appealing than the others to the 32-year-old. Jedrzejczyk told BJPENN.com that she wants to complete the trilogy with former champion Rose Namajunas to try settle the score with her long-time rival and make big money in the process.

“I am really proud of myself and my team of how we fought that last fight against Rose Namajunas. The fight could have gone either way and the loss was hard to swallow and maybe I didn’t do enough. Now, I know I believe in myself 100 percent and can do enough to win. I’m really happy for Rose that she is back fight and fighting Andrade and having the rematch. We will see what is next, but that fight makes sense as it is big money. I want that one.”

First up Namajunas has an eagerly anticipated rematch coming up against Jessica Andrade. In the first fight Andrade powered her way out of a submission by slamming Namajunas to the mat, scoring the knockout win and claiming the 115lb title in the process. However, her title reign was short lived as Zhang stopped the Brazilian inside one minute at UFC Shenzhen in August 2019. The two will now meet again in what will likely serve as a number one contender fight at UFC 249. The winner will be confident of securing the next title shot against either Jedrzejczyk or Zhang.

Would you like to see Joanna Jedrzejczyk vs. Rose Namajunas III?