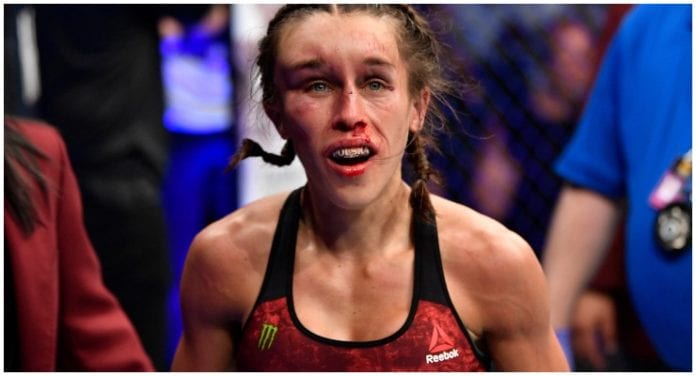 Joanna Jedrzejczyk‘s face is all but healed up now — but she certainly didn’t like the injuries she suffered.

Jedrzejczyk went viral earlier this month after suffering a hematoma on her forehead that continued to swell up in her razor-thin split decision title defeat to Weili Zhang at UFC 248. In addition to her forehead, she also suffered multiple bruises to her face following an epic five-round war with Zhang.

As one who prides herself on cleanliness, the extent of her injuries was difficult for the former champion to handle. However, it’s the price she has to pay given the nature of the sport:

“Honestly, I know I’m in a man’s sport, but I don’t think there is a sport for a girl or a sport for a guy – the world is free, (and) it’s the 21st century. I’m a very clean person, (and) my aesthetic, I like to keep it clean,” Jedrzejczyk said on a recent edition of MMA Fighting’s Eurobash podcast. “My clothing…I take showers about four or five times a day! I’m very girly, so I hate myself when I’m like this, but that’s the price we have to pay.

“… There’s always a [bad] side to your job or your [profession]. I hate it, man, I hate it and I want to take care of my health. Being an athlete, being in this sport, it changes your body; it changes your head, your mind; how you look and how you walk. It cost me a lot of sacrifices, changes in my body and I’m still a woman, I want to be attractive. And I want to be a mother in the future so I always want to take care of my health. In the UFC you have everything – good healthcare and they’re always taking good care of us.”

Despite the injuries, however, Jedrzejczyk still found time to laugh at some of the memes that were circulating online following the fight.

“There are still a few bruises, but I was laughing about the memes after my fight,” she added. “Even though I cut myself off from social media I was still laughing, but I’m telling you guys from the next day, the swelling in my forehead went down and I couldn’t see out my left eye for two days.

“I had a vision of only five percent in my left eye – it was pretty rough. It is what it is, the swelling went down.”

Whenever the UFC schedule resumes, not many would complain about a rematch between Jedrzejczyk and Zhang. That’s if the strawweight champion is open to it.