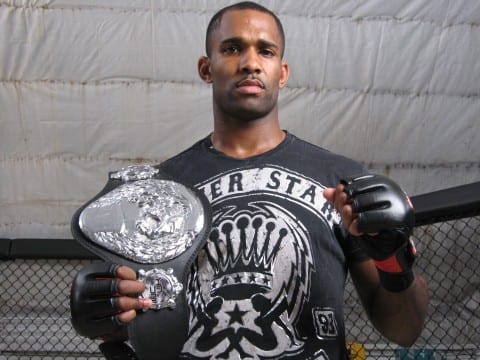 Considering the fact that he finished his first 14 mixed martial arts (MMA) bouts in a row, it came as a surprise that No. 9-ranked light heavyweight Jimi Manuwa’s decision win over Jan Blachowicz in the co-main event of today’s (April 11, 2015) UFC fight Night 64 from Krakow, Poland, was a bit lackluster.

Known for his thunderous striking, Manuwa spent much of the bout uncharacteristically clinching to the point where the referee was forced to initiate numerous restarts. He showed a bit of his trademark knockout ability in brief spurts against Blachowicz, but overall he was noticeably not himself.

After the fight, however, we learned the real reason for Manuwa’s lack of zip in Poland when unveiled the fact that he was seriously injured in his post-fight interview:

Going into further detail at the post-fight press conference (transcribed by MMAFighting.com), Manuwa described the overall condition of his injury, which turned out to be a serious knee injury suffered in training. All things considered, the fact that he won is becoming more and more impressive by the moment:

“I almost didn’t make it to the fight. I only got cleared, like, literally last week to fight. I had a bad knee injury. I tore my meniscus, and MCL and ACL as well. They told me I shouldn’t fight, and I said no, I’ve got to fight. I can’t pull out of the fight. So you know, it was a big decision for me and the team, but we had to go through with it.”

Manuwa tore his meniscus and two major ligaments and was still cleared to fight, while the meniscus injury alone has forced out fighters like Jon Jones, Alexander Gustafsson, and Yoel Romero recently. While it may not have been pretty, it’s a true testament to his heart and determination as a fighter.

It also made him go into uncharted territory of a judges’ decision, but Manuwa wasn’t all that worried. He thought he had all three rounds in the bag when it was said and done:

“I was pretty sure I won all three rounds, but I don’t know, I’ve never been to a judges’ decision before so it was a new thing for meant. It meant a lot to me, because like I said before, I almost didn’t make it to the fight. Jan is a tough, tough opponent. He hasn’t lost in like eight years, and I’m glad I could come out with a win and I got three rounds.”

Apparently Manuwa wants to get the injury repaired and miraculously fight another two times in 2015:

“I’m going to get the injury sorted out straight after this,” he said. “And then depending on the recovery time, I want to fight another two times this year, top-10 opponents.”

He may be due for a relatively big name fight next, but coming back from a torn ACL in addition to other serious concerns would make it seem that Manuwa would be on the sidelines for the rest of the year.

On the other hand, he won a grueling match-up with the injuries today, so we’ll have to wait and see when the “Poster Boy” bounces back into the Octagon.