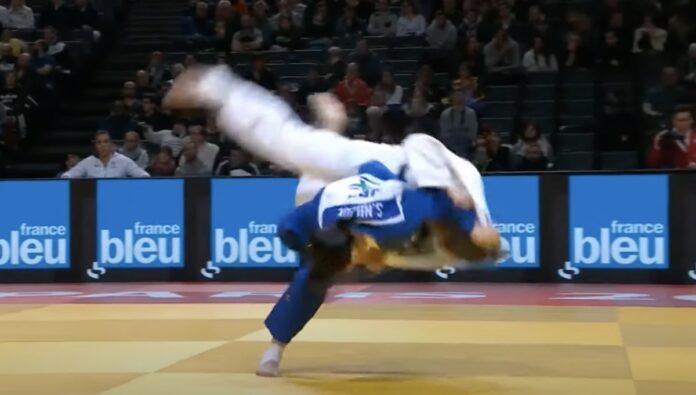 The Harai Goshi is one of the core throws within the martial art of Judo. It’s a simple yet powerful throw that is great to add to your grappling game.

Here is what you need to know about the famous Judo throw. We’ll review different setups and important tips for hitting the throw.

Harai Goshi was of course, developed by the creator of Judo, Grandmaster Jigoro Kano. It is one of the core hip throws that Judokas must know to advance in belt rank.

When Kano developed the throw, he based it on the same principles as every other technique in the martial art. Using the principles of leverage and timing to execute Harai Goshi.

The throw’s simplicity is what makes the move so effective. So much so that numerous other forms of grappling have adopted Harai Goshi into their martial arts.

Today, there are numerous setups in both the Gi and No-Gi.

How Does Harai Goshi Work?

Like all of the throws within Judo, Harai Goshi functions on the same principles. It’s all about timing, body positioning, and footwork.

For the the throw to work, you must move the opponent forward and get your hips under their hips. When you’re able to pull them off-balance, this gives you the opening to go into the throw.

You get your opponent up and over as they come forward by reaping at or below their knee. When done correctly, your opponent goes over with ease.

Those new to Judo or grappling will often confuse the Harai Goshi with the Uchi Mata. While they have similar setups, there are two big differences between them.

You also step a bit deeper in with the Uchi Mata setup than you do with the Harai Goshi. Both throws complement each other very well, and it would give you an advantage to know them.

It will enable you to create different setups and fakes, going from one throw to the other.

The basic Harai Goshi setup, like all basic Judo throw setups, starts with a collar and sleeve grip. You grab high on your opponent’s collar with one hand, and you grip at their elbow with the other.

Once you get your grips, you start the setup by pulling and lifting your opponent. Each grip will be moving in unison to pull your opponent off-balance.

Your sleeve grip hand lifts their arm up and pulls them forward. Rotating your elbow up is important to give you the opening to step into the throw.

At the same time, you’re also pulling your opponent off balance with your collar grip. Turn your elbow in and punch at a slightly upward angle to the side to knock them off-balance.

The footwork will be a 180-degree pivot where you face your opponent the same way. Step in and turn with your sweeping foot first, with your support foot following behind.

Remember to always step in between your opponent’s feet for this throw. Stepping to the outside is incorrect and will open an easy counter for your opponent.

When you sweep the leg, you must reap/kick at knee level while keeping your toes pointed down.

To complete the throw, you put all of these steps in one swift motion as you continue driving forward.

The common defense against Harai Goshi is to drop your hips and lock out your knees. Doing this prevents your opponent from doing the basic setup.

If your opponent does this defense, you can still do an alternate version of the Harai Goshi. You won’t be able to lift your opponent up, so you will have to shift your weight differently.

Connect the calf of your sweeping leg to your opponent’s outside knee to lock it out. Next, instead of trying to lift your opponent, you’re going to make them lean forward and rotate them.

Using your grips to pull them down as you roll to take your opponent over.

The No-Gi version of Harai Goshi is commonly used in freestyle wrestling and has also proven effective in No-Gi Jiu Jitsu. Since you don’t have a Gi to grab, the gripping will be slightly different.

You start the setup by grabbing a collar tie on your opponent’s head with your backhand. Use this collar tie to pull their head down and take an underhook with your other arm.

Naturally, when you get this collar tie, your opponent is going to lock their elbow in to prevent a go-around. Your free hand will take wrist control on your opponent’s other arm.

Once you get these two points of control, you can go into the steps. Do a back step in and turn while pulling your opponent forward, then sweep below the knee, and complete the throw.

You can easily set a trap for your opponent by attempting O Soto Gari to get Harai Goshi. Start with a grip on the opponent’s elbow and reach behind their body to grab hold of their belt.

Once you grab these grips, you will quickly step in and hook your leg behind your opponent’s leg. They will instinctively defend O Soto Gari by bracing, creating an opening for your Harai Goshi.

Step your plant foot back between your opponent’s feet as you turn them and throw them over.

When your opponent takes a dominant high-collar grip, you can use this as an entry into a Harai Goshi variation. Start the setup by blocking the high grip by gripping under the arm.

Next, bring your back elbow up and over your opponent’s arm. Be sure to sink your weight down and grab hold of your own lapel to keep the arm in place.

When you do this, the opponent will try to recover their posture, which gives you the opening for Harai Goshi. Pull their arm down and sweep the leg to complete the throw.

This Harai Goshi setup has slightly different footwork to create misdirection before attempting the throw. Grab a collar grip with your backhand and step across your body with the same side leg.

This first step is a fake to create misdirection. You’re then going to step back in with your other foot and grab hold of your opponent’s head. Continue breaking their posture by pulling them forward and completing Harai Goshi.

This video shows you the steps for the previous three Harai Goshi variations.

Important Tips For The Harai Goshi

The mechanics for Harai Goshi are simple but must be exact to complete the throw. Here are the important tips to remember.