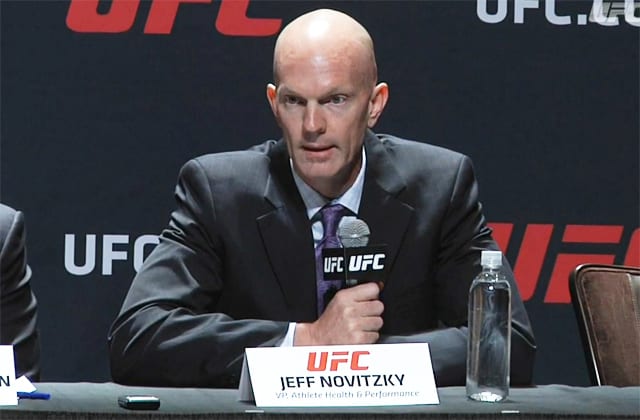 Jeff Novitzky was just nominated for an award as part of this year’s World MMA Awards.

The complete list of categories was recently released and one name stood out when it comes to the “Leading Man” category. He’s listed alongside Dana White, Martin Lewandowski of KSW, Chatri Sityodtong with ONE Championship, and Bellator MMA’s Scott Coker.

Novitzky is the current Vice President of Athlete Health and Performance for the UFC. When looking at the other names on this list, some people could question as to why he’s on this list.

It could be due to him having to be the public speaker for the Las Vegas-based promotion when he had to explain how they allowed UFC light heavyweight champion Jon Jones to fight when the great picogram disaster happened in late 2018.

The criteria for “Leading Man” reads like, “Awarded to the leading industry executive, whether it be a commissioner, a company president, an influential CEO or even a politician. Presented to the movers and shakers, hirers and firers that make planet MMA turn successfully.”

It all started in the lead up to his fight at UFC 232 PPV event once it was revealed “Bones” had metabolites of turinabol still in his system. Despite repeated adverse findings, the UFC 232 post-fight drug tests came back clean. This is the same drug that got him a 15-month suspension due to it being a banned substance.

Despite Jones continuing to test positive for picograms of Turinabol, USADA and the UFC let him fight. It seems like every time that Jones fights, Novitzky has to go in front of the media and explain the situation.

Apparently, he deserves to be nominated for an award for doing so.