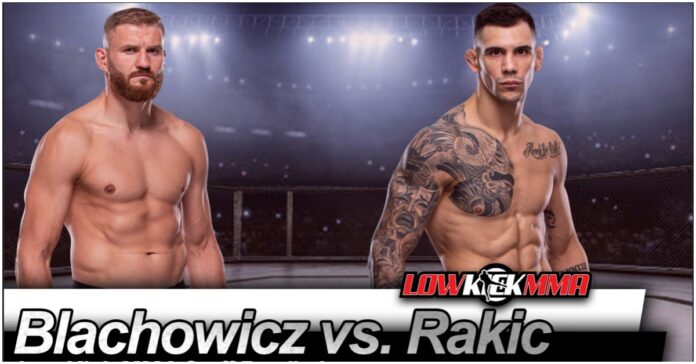 This weekend’s UFC main event features two elite light heavyweights clashing in what could well be a No.1 contender bout, with the victor likely to go on and face the winner of Glover Teixeira and Jiri Prochazka.

Former UFC light heavyweight champion Jan Blachowicz will take on surging contender Aleksandar Rakic. The two European giants are known for their finishing ability, and will undoubtedly put on an exciting and dynamic performance as they attempt to assert dominance over the 205lb landscape.

Who will pick up the win and take that next step towards title contention? Let’s see what the LowKickMMA staff have to say:

Excellent matchmaking here from the UFC between two elite contenders both hailing from Europe – If only the fight were taking place in Poland or Austria. Regardless, it still has the makings of an extremely competitive bout. I am currently leaning towards Blachowicz. Rakic has a reputation for being a lethal knockout artist, but since his split decision loss to Volkan Oezdemir in 2019, ‘Rocket’ has become considerably more tentative in his approach. This did allow him to pick up wins over Thiago Santos and Anthony Smith, but against the ferocious tenacity of Blachowicz, I believe this approach will crumble. Blachowicz has demonstrated the ability to keep a high pace throughout and has a number of additionally damaging attacks in his arsenal. Blachowicz by decision or late stoppage.

Former champion, Jan Blachowicz has been sidelined since losing the undisputed UFC light heavyweight championship last October to Glover Teixeira – and appears to be entering this weekend’s UFC Vegas 54 rescheduled headliner against Aleksandar Rakic with a certain chip on his shoulder. Suffering a surprising submission loss to the Brazilian, a combination of age and the fact that he’s surrounded by surging contenders at 205lbs, the Pole is faced with somewhat of a crossroads fight at light heavyweight. Experience will likely play a sizeable factor in his fight with Austrian-born upstart, Rakic – as well as a certain technical edge which will force Rakic to consider all means of offense beyond his composed striking, rangy shots, and the eventual utilization of his wrestling game. Blachowicz can, however, take solace in the fact that he’s faced the likes of fellow athletic strikers such as Israel Adesanya, and former champion, Luke Rockhold – and has emerged with victories in both. I’m expecting Blachowicz to land a decision victory over Rakic in a composed outing, without an overabundance of risking taking over the course of five rounds.

Rakic is ready to take that next step and will walk away with his hand raised. He’s been lights out since his loss to Volkan Oezdemir. I see Rakic fighting a smart fight and staying along the outside while technically picking Blachowicz apart. Although, one thing that is worrisome is Rakic’s long absence from the cage. With that being said, I believe youth prevails in this one and Rakic will most likely fight the winner of Glover Teixeira and Jiri Prochazka for the title.

The main-event show at UFC Vegas 54 is set to be an interesting affair. Aleksander Rakic will be looking to further establish himself in the Lightweight division, with a win over the former champion Jan Blachowicz. However, despite the fact that Blachowicz is in the latter stages of his career. I believe the 39-year-old still has miles in the tank and will aim to utilize his high-level wrestling and Jiu-Jitsu to reduce Rakic’s ability to use his length and come out with a convincing decision victory this Saturday evening.

Who do you see winning this weekend?