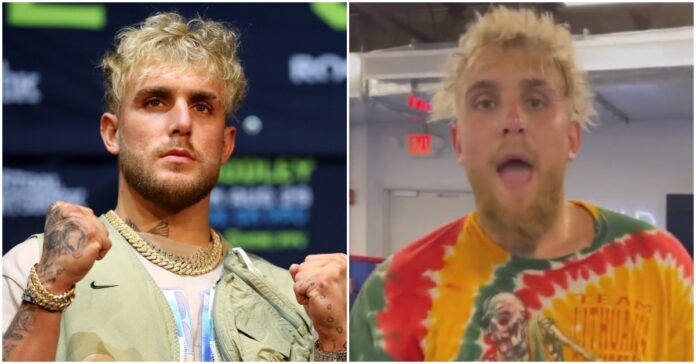 Jake Paul has taken to social media to announce that his next fight will be in August.

“August I’m back baby,” Paul said in the clip. “Anyone who’s been talking you’re going to be silent again. I’m knocking ya’ll the f*ck out! No cap. F*ck you pussies.”

It’s currently unclear who will be Paul’s next opponent. ‘The Problem Child’ was previously booked to face Tommy Fury, an undefeated boxing prospect who also happens to be related to the WBC heavyweight champion, Tyson Fury.

The Love Island star was forced out of the bout due to injury/illness but a fight with Paul could be rectified in the near future.

“I like that fight a lot because it silences the critics,” Paul said earlier this year. “He was a world champion and I know I could beat him…

“I want to fight a real boxer and I’m going to, have some f***ing patience.”

Paul transitioned to professional boxing in 2020 and has quickly amassed a perfect 5-0 record but he is yet to face anyone with a background in striking.

The 25-year-old made his debut against AnEsonGib and scored a first-round TKO win over his fellow internet celebrity.

On the Tyson-Jones undercard, the YouTube star turned stretched his perfect record to 2-0 with a sensational KO win over former NBA star Nate Robinson.

Since then, Paul has continued to pursue a career in boxing without actually facing any boxers. The 25-year-old has fought two MMA champions in Ben Askren and Tyron Woodley (x2) stretching his undefeated record to 5-0 in the process.