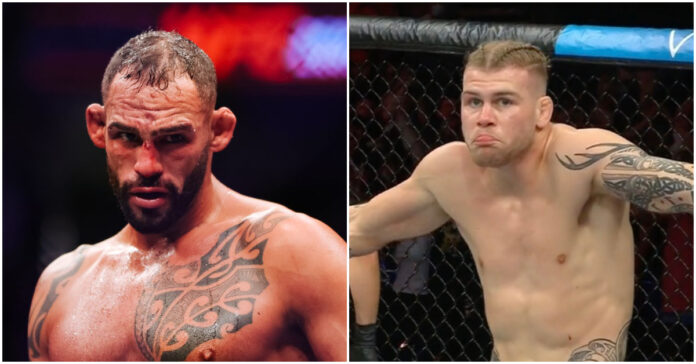 Jake Matthews has called for a battle against Santiago Ponzinibbio.

This past weekend, Jake Matthews secured the biggest win of his career against Andre Fialho at UFC 275. The difference in the striking abilities between the pair was evident with Matthews showing an exemplary display of boxing. He knocked down Fialho before finishing him in the second round.

Coming off the biggest win of his career, ‘The Celtic Kid’ is looking to challenge himself opposite another high-level striker in the division. Following an impressive run of seven wins in his last nine in the UFC, Matthews is looking to take on Santiago Ponzinibbio to get closer to the welterweight gold.

“PLEASE SHARE AND SPREAD THE WORD
@sponzinibbiomma It would be an honour!
Let’s stand toe to toe for the fans! @ufc @ufcanz“

Matthews earned a Performance of the Night bonus for dispatching Fialho by knockout. He went a step further and offered to give Ponzinibbio half the bonus he expects to win if the outing goes as expected.

Matthews came in as a big underdog in his lastest bout and cashed in with a win. He wants to prove that his victory was not a fluke and that his performance has leveled up.

Ponzinibbio is reeling off two consecutive losses by a split decision. He dropped one to Geoff Neal and then Michel Pereira in his most recent fight at UFC Fight Night 206. He expressed his disappointment with the results and believed that he was unfairly treated by the judges on both occasions.

Before his win over Fialho this past Saturday, Matthews was coming off more than a year-long layoff following a defeat to Sean Brady by submission last March. Matthews is still only 27 despite joining the UFC roster in 2014 and has a good amount of experience under his belt at a young age.