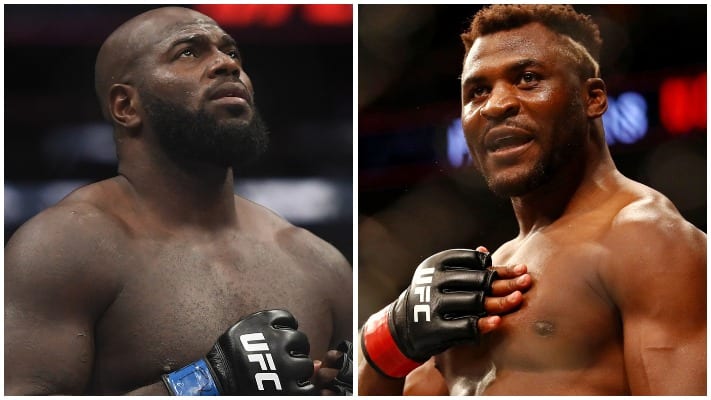 Heavyweight contender Jairzinho Rozenstruik is hoping to rematch Francis Ngannou at some point and says he’d fight the Cameroonian knockout artist tomorrow if he was given the chance.

Rozenstruik and Ngannou squared off in an eagerly anticipated fight at UFC 249 on May 9. ‘The Predator’ finished the bout in scarily quick fashion, scoring a huge knockout win with just 20 seconds on the clock. Just 10 fights into his career it appeared Rozenstruik had stepped up in levels too quickly. Despite that, the decorated kickboxer holds no regrets about taking the fight and expressed his willingness to face Ngannou again given the chance.

“Regret, no,” Rozenstruik told MMA Junkie. “It was a big chance. We knew that it was a big fight, a big challenge. And it didn’t go my way, but my dream is still alive. I hope he becomes champion. If you ask me to fight him tomorrow, I’d fight him again. I train to fight him again. Respect, it’s all business. I wish him luck, and hopefully I see him around.”

“For me it was more, we didn’t really get into it (the fight). It happens in fights. And, yeah, a defeat, a loss is always not good. It’s not nice, and yeah it sucks. Now I’m back in the gym training hard, and let’s try again. Let’s get back in the octagon, which is what I’m looking forward to the most.”

Rozenstruik will be looking to bounce back from his first career loss at UFC 252 on August 15. He’ll take on former heavyweight champion Junior Dos Santos who also trains at American Top Team but that won’t be an issue according to Rozenstruik who explained.

“I just got the opportunity, and I said yes. No disrespect to Junior, he’s a nice guy. We train at the same gym, and every time I see him he’s always nice. He’s always a good guy, but at the end of the day, it’s going to be business that we have to settle. So I mean, if I get the opportunity, I take it.”

Do you want to see Jairzinho Rozenstruik and Francis Ngannou rematch down the road?