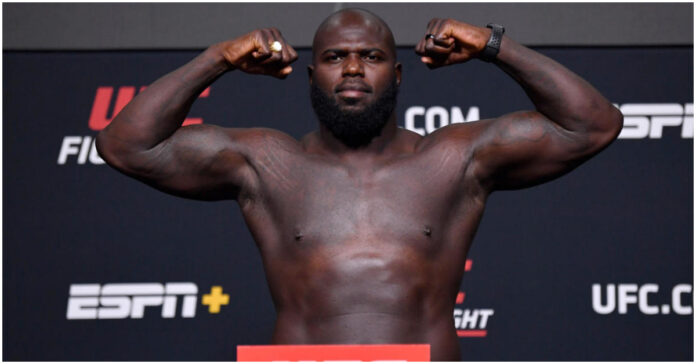 In an interview with LowKick MMA, Rozenstruik shared his thoughts on his upcoming match against Volkov. ‘Bigi Boy’ believes the fight will mostly be on the feet and any error in the cage will lead to a quick finish.

“I think it can be a stand-up fight because he’s also a striker. I know he has some jiu-jitsu but mostly I think is going to be stand-up. Yeah, we’re going to see how it plays out. Of course, I’m looking for a win,” Rozenstruik continued, “When I see him, I’ll be there. He’s a big guy, he’s a big tree so I’ll be more moving, finding my angles and try to land what I can land and then see how he reacts. But I would say any error, any mistakes you’re out”

James Lynch probed the Surinamese fighter about Tom Aspinall’s recent win over Volkov and whether he was surprised about that.

“Actually I think it was expectable that Tom is good but I didn’t expect it to be so early in the match. So, I was surprised about that.”

The knockout artist gave props to Aspinall and speculated what might have led to Volkov’s loss. “I think maybe he’s (Aspinall) that excellent,” Rozenstruik added. “It’s the moment, it’s the time you had the fight, you don’t know what happened. Anything can happen.”

Coming off a loss to Curtis Blaydes, Jairzinho Rozenstruik will fight against an opponent who was defeated by Blaydes’s next adversary, Aspinall. With the top and rising heavyweights being matched up against each other, Rozenstruik is excited to see how things play out.

“I think it’s a pretty good matchup. I know those fights are going to come, same as the fight with Ciryl Gane and Tuivasa. The whole heavyweight division is kinda booked so it’s going to be awesome after all these fights so we know where we stand and who we going to face after this.”

The 34-year-old does not seem to be concerned with who wins the contest and is ready to take on whoever comes out on top.

“I don’t really care who wins. For me, the most important thing is who I’m going to face after this. If it’s going to be him or Blaydes or somebody else. I hope it play out good for them and then I face one of them after.”

When Jon Jones announced his move to heavyweight over two years ago, fans were excited to see the greatest mixed martial artist compete against the big boys. There have been strong indications suggesting Jones will take on the greatest heavyweight of all-time in the UFC, Stipe Miocic, in his debut fight in the division.

While Jairzinho Rozenstruik believes the fight makes sense for the fans, he shared his discontent with the possibility of it being for the interim UFC heavyweight title.

“I definitely think it’s the fight to make for the fans,” he said. “But I disagree with him coming in and fighting for the title because we’ve been there running the division. He doesn’t, he was on the side sitting and saying he’s coming to heavyweight. At first, I was motivated that he’s coming to heavyweight, it can be a possible fight. It takes so long, what two years, two years and a half. So I kinda disagree with that that he wasn’t fighting doing anything and he jumped right in for the title.”

Do you want to see Jairzinho Rozenstruik take on Jon Jones in the future?