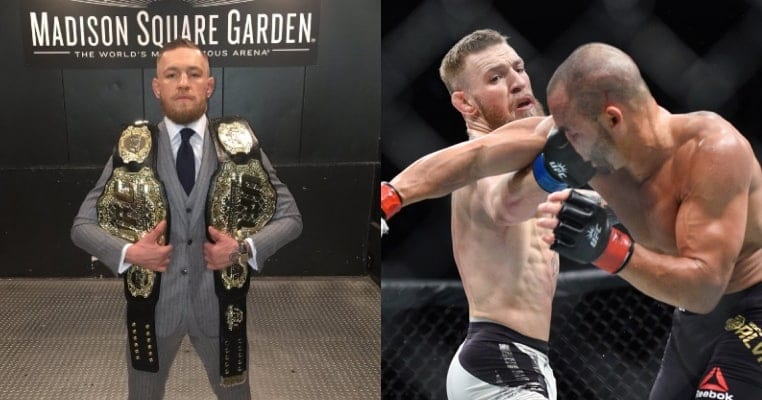 Returning to the octagon at UFC 205, featherweight champion Conor McGregor had his sights set on making history. Flattening Eddie Alvarez within two rounds, ‘The Notorious’ etched his name in the record books as the first champion to hold belts in two divisions at once. Now the champion at both 145 and 155 pounds, the loud talking hard-hitting Irish striker has taken things to a whole new level. Obviously there are a host of other names included in this argument, but does this two-weight championship achievement place McGregor at the top of the all-time greats list?

Since joining the promotion in 2013, McGregor has enjoyed an unbeaten seven-fight run at 145 pounds, before going 1-1 at welterweight against Nate Diaz. As mentioned, he became the first multi-divisional champion by starching Alvarez, bringing McGregor’s overall record to 21-3. Following from his unreal victory at UFC 205, ‘The Notorious’ has the MMA world in his palms.

Answering the question of who ranks as the best fighter in MMA history is never easy. In terms of skills, though, it’s hard to argue against Conor McGregor being right up there. What we saw against ‘The Silent Assassin,’ a man who recently demolished Rafael dos Anjos, was nothing short of pure pugilistic mastery. Even the sects of anti-McGregor fans that continuously oppose his achievements have to stand back and admire the Irishman’s latest work.

If you look at it in terms of records, it’s actually hard to put someone’s career inside a frame before it has surmised. Although it’s highly unlikely, in MMA there’s always a chance that one’s career could suddenly spiral. Wins over two-promotion champion Eddie Alvarez and featherweight legend Jose Aldo arguably have ‘The Notorious’ well on the way to all time legendary status, if not already there.

Then, of course, there’s the historic achievement of breaking the holiest of UFC records. Some will argue, though, that Conor McGregor should never have been fighting for the title in the first place. Like it or not, he did, and ‘The Notorious’ made Eddie Alvarez look amateur. Did McGregor use his pay-per-view draw as leverage to gain extra sway from the promotion? Well, yes, but that’s all part of his fight. It’s no co-incidence that other fighters have now started adopting the McGregor style of talking and promoting, making his influence on the game all the more wide-spread.

Is Conor McGregor the greatest fighter ever? Well, I guess that’s in the eye of the beholder, but he’s certainly the first to hold simultaneous belts in the UFC, and the first to consecutively shatter the PPV buy records in UFC history. Where will this topsy turvy ride take us next?