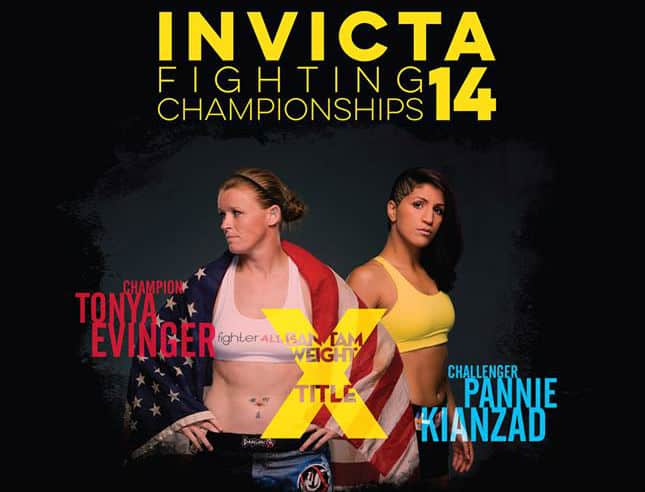 It’s was once again fight day here at Low Kick MMA, and the talent on display on Saturday, September 12th, 2015 came from Municipal Auditorium in Kansas City, Mo, in the form of Invicta FC 14. Headlining the card are Tonya Evinger (17-5) and Pannie Kianzad (8-1).

In the  main event, Tonya Evinger (17-5) vs. Pannie Kianzad (8-1) met in a bantamweight bout. Evinger showed why she is the champ in this fight even if she wasn’t defending her championship this time round. Complete domination. Evinger took her down and forced her will on Kianzad. Evinger finished Kianzad with strikes to end the fight in the second round.

In the co-main event, Katja Kankaanpää (10-3-1) vs. DeAnna Bennett (8-0) met in a strawweight bout. Fans of grappling would have loved this fight, but if that’s not your style of MMA then it was a decent fight. Kankaanpää owned Bennett with her takedowns and just did what she needed to do while on top of Benette in this fight. However, to the shock of Miesha Tate on commentary and fans on Twitter, Bennett won the fight by unanimous decision. Even during the post-fight interview, Bennett said that the third round sucked and was shocked by the decision win.

Roxanne Modafferi (18-12) vs. Mariana Morais (9-3) met in a flyweight bout. A one sided fight that came to an end in the final round as Modafferi got into mount and finished Morais with strikes to earn a third-round TKO win.

Rachael Ostovich (2-2) vs. Andrea Lee (3-1) met in a flyweight bout. This was a fun fight for sure. Lee dominated the fight, but Ostovich put up a heck of a fight. Lee almost finished the fight in both the first round with a rear-naked choke and in the second round with an onslaught of knees to the ribs of Ostovich. Both of those were right before the bell sounded to end the round. Lee would bust open Ostovich in the third round. Lee made Ostovich tap out by armbar with just two seconds left in the round.

Cindy Dandois (6-2) vs. Megan Anderson (4-2) met in a featherweight bout. Dandois controlled and dominated the first round with her takedowns, that resulted in her winning round one. In the second round, Anderson had fire and was winning the round with her striking, but took Dandois down for some reason. This was a mistake as Dandois locked in a triangle choke from her back and finished the fight.

Jamie Moyle (3-1) vs. Sharon Jacobson (4-1) met in a strawweight bout. A normal opening round from these two with not much going on as they stayed on the feet. The second round was great as both girls were throwing bombs and really trying to land some crash spinning strikes. It was like a video game. The third round was completely different as Jacobson tried and did get the fight to the ground with her takedowns, but couldn’t keep Moyle on her back for a long period of time. The judges gave the win to Jacobson by unanimous decision.

Jinh Yu Frey (4-1) vs. Liz McCarthy (2-2) met in an atomweight bout. Frey dominated the first and partially the second round, but McCarthy made her comeback with her straight right strikes that were hurting Frey. A back and forth fight that was mainly contested while standing. In the end, the judges gave the victory to Frey by unanimous decision.

J.J. Aldrich (3-1) vs. Rosa Acevedo (1-1) met in a strawweight bout. Aldrich worked over the body of Acevedo early in the fight with right hooks, but mostly knees to the gut. Aldrich had Acevedo pushed up against the fence, she landed a knee to the gut of Acevedo, which hurt her. Aldrich blasted her with knees to the gut then finished her on the ground with strikes to earn a first-round TKO victory.

Here are the quick results from this event: