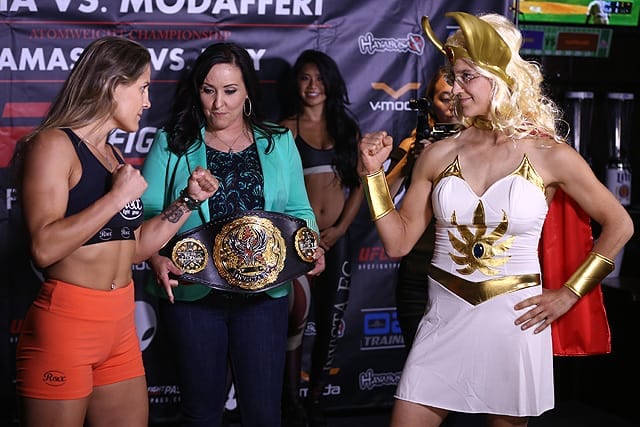 It’s once again fight day here at LowKickMMA, and the talent on display tonight (Friday, September 23rd, 2016) will come in the form of Invicta 19. Headlining the card are Jennifer Maia and Roxanne Modafferi, but there’s a whole bunch of great fights also taking place on the preliminary section of the card.

Jennifer Maia and Roxanne Modafferi met in a flyweight title bout as the main event of Invicta 19. In round 1, Modafferi pressed forward early and they had a nice exchange. Modafferi was mixing up her strikes and kicks nicely. Maia clinched and pressed her up against the fence. In round 2, Maia was the more aggressive fighter in this round and was pressing forward more and more. Modafferi scored a takedown midway through the round but Maia scrambled and got on top in guard. Maia landed a series of strikes while Modafferi worked for an arm bar. Modafferi scrambled and got on top in half guard with less than a minute to go. In round 3, Modafferi scored a takedown midway through the round and got guard on top. Maia scrambled and got back to top opposition and landed some hard elbows. In round 4, Maia was starting to wear down at this point and Modafferi was finding her range and landing some good shots. Maia rocked her and knocked her down. Maia swarmed her with strikes on the ground. Modafferi got back to her feet while eating strikes. Maia clinched with her and Modafferi separated with less than two minutes to go in the round. Maia scored a takedown to end the round. In round 5, they exchanged for the majority of the round. Both girls threw it all out there. Maia clinched with her near the round, landed a couple of combos and then separated. Maia went for a takedown but it was stuffed. The judges gave the win to Maia by split decision. Maia is the new flyweight champion.

Ayaka Hamasaki and Jinh Yu Frey met in a atomweight title bout as the co-main event of Invicta 19. In round 1, Hamasaki clinched with her out of the gate. Frey separated and they went back to striking. Frey clinched and took her down midway through the round. Hamasaki got back to her feet and they clinched up against the fence. Frey took her down and got mount. Frey landed some big strikes from top position. Frey got back mount and continued the beating. In round 2, Hamasaki took her down to begin the round and got guard. Frey scrambled to her feet moments later and they exchanged on the feet. Frey pressed forward and then clinched with her briefly. Frey had a nasty cut on her left temple. The fight was stopped by the referee. Hamasaki won the fight.

Irene Aldana (5-2) and Faith Van Duin (6-2) met in a bantamweight bout at Invicta 19. Aldana pressed forward early and was busting her up with strikes in the face. Duin was bleeding from her mouth and staying in the fight and was landing with counter strikes. Aldana rocked and dropped her and finished her on the ground with strikes.

Tiffany Van Soest and Kal Holliday met in a strawweight bout at Invicta 19. In round 1, Holliday pressed forward and scored a takedown early in the round. Soest got back to her feet but Holliday took her right back down and worked her over with strikes from side card. Soest scrambled and got back to her feet but Holliday slammed her down and landed a hard right hand. Holliday got her back and went for the rear-naked choke but Soest got out. Holliday went for it again moments later but Soest got out again. Holliday stayed on her back and worked her over with strikes. Soest scrambled to her feet with 40-seconds left in the round. Soest landed a big overhand but Holliday took her down. In round 2, Holliday scored an early takedown from the clinch and landed some hard shots from back. Holliday worked her over with strikes and applied the rear-naked choke once more and got the win.

Julia Jones (5-0) and Stephanie Skinner (4-6) met in a atomweight bout at Invicta 19. This one did not last long. Skinner pulled guard and Jones got full guard on top within the first minute. Skinner went for an armbar but Jones pulled out and got half guard then pressed her up against the fence and landed some strikes. Jones got back her back and locked in the rear-naked choke for the win.