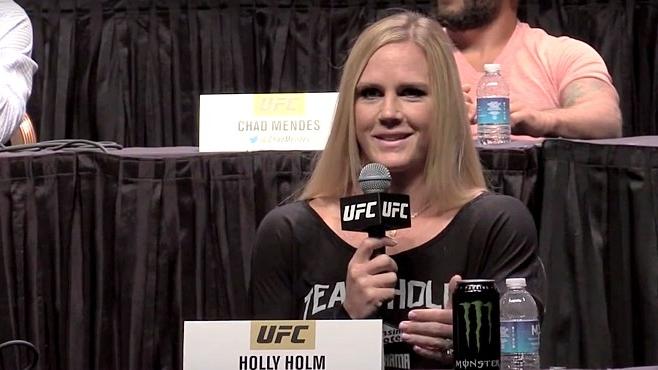 Former UFC champ Holly Holm is apparently looking to get a fresh start in the New Year.

According to TMZ, Holm has filed paperwork in her native Albuquerque, New Mexico, to divorce husband Jeff Kirkpatrick. The couple reportedly met at the University of New Mexico. Holm and Kirkpatrick dated for years. They were ultimately married in Cancun in 2012.

Holm apparently has a change of heart, however. Court documents from TMZ stated Holm filed for divorce after she cited “incompatibility because of discord and conflict of personalities.” Holm and Kirkpatrick had been separated since March 2018. Holm has also asked for her original name of just “Holm” back after her legal name has been Holm-Kirkpatrick during the marriage.

Court documents also claimed Holm said both sides were self-supporting. Due to that opinion, she claimed neither side should receive spousal support. Perhaps Kirkpatrick may have another opinion given Holm’s lucrative career as one of the most popular female fighters on the UFC roster.

Inside the Octagon, Holm became one of MMA’s darlings when she knocked out Ronda Rousey in November 2015 to win the women’s bantamweight title in one of the sport’s biggest-ever upsets. She lost the title to Miesha Tate in her next bout, however. Holm went on to fight Cris Cyborg and Germaine de Randamie for the women’s featherweight title.

Her last performance was an impressive decision win over formerly touted featherweight Megan Anderson. Holm will now take on another rising star in bantamweight prospect Aspen Ladd at UFC 235. When she does, she’ll appear to have her relationship troubles in the past.