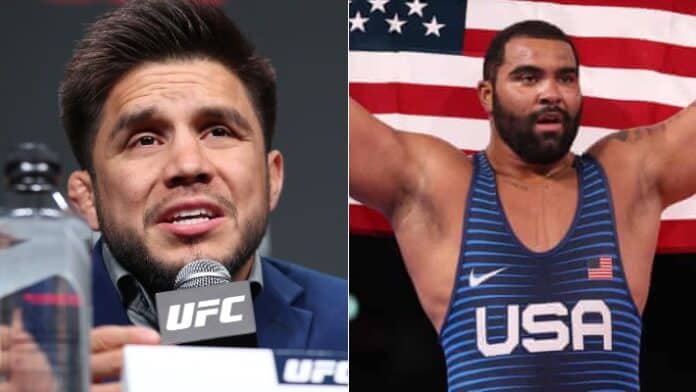 Henry Cejudo believes fellow Olympic gold medalist Gable Steveson has what it takes to go far in the MMA world.

Steveson took home the Olympic championship last month in Tokyo. Since then, the 21-year-old has had a number of offers cast his way, from a tryout opportunity with the Buffalo Bills to the obvious progression into mixed martials arts. Dana White and the UFC have made it clear they would love the chance to bring the wrestling superstar on board.

One man who obviously knows a thing or two about making the jump from wrestling to MMA is Cejudo. The 2008 gold medalist transitioned to MMA in 2013 and went on to claim both UFC flyweight and bantamweight championships. In an interview with TMZ Sports, Cejudo said he can see Steveson having similar success to what he had (H/T MMA Fighting).

“I actually talked to Gable yesterday,” Cejudo said. “I’m just giving him pointers, saying listen, you’ve got your manager, you’ve got your agent but you’ve got to strike while the iron is hot. You’ve got to push them, you’ve got to work, and whatever it is you decide to do, you’ve got to focus in on that and actually have a game plan because you cannot just try to dabble in all of them. A master of all trades is a master of none. Focus on one and then go to the others. I think he should do two years here, two years there, and then decide because he really does – he’s 20 years old and he has the ability to do all of them.”

Steveson and White were originally expected to meet over the weekend before the Olympian backed out. Steveson said he didn’t feel as though the UFC was truly interested in signing him, but left the possibility of a future meeting open.

“The UFC can’t afford him,” Cejudo said. “I’m sorry, they can afford him but they’re not gonna pay him, unfortunately. I do believe in the next couple of years he could beat a guy like Jon Jones or even Francis Ngannou. He’s the biggest threat because of his wrestling base which is extremely scary…

“He’s a real heavyweight,” Cejudo continued. “If you were to put him in there right now, Jon Jones would hurt him, Francis Ngannou would hurt him. I’ve been there before. When I first fought Demetrious Johnson, I had already had standup and I got knocked out at 2 minutes and 36 seconds. So you do have to respect the game.”

While he turned down the opportunity to meet with White and the UFC, that doesn’t mean Steveson isn’t listening to offers. He was recently seen at Bellator 265 a week ago, and took some photos backstage at WWE’s SummerSlam event this past weekend. Both companies surely did their best to coerce Steveson into signing with them. As well, there’s always the possibility he returns to amateur wrestling with the hopes of defending his Olympic title. The Paris Olympics are only three years away, so he could hypothetically hold off on making any decisions until after then.

“What Gable Steveson needs right now, he needs time,” Cejudo said. “Whatever he decides to dedicate himself to, he needs two years, even for the WWE. He could probably fast-track the WWE because it’s stunts and it’s an act. But if he’s gonna go back to wrestling, he needs to go back immediately for amateur, Olympic-style wrestling. Or he’s gonna have to start training. I would go the Bellator route and maybe go to these smaller shows to build him up and then eventually take it to the UFC where they can put him against a top-five opponent right away and eventually fast-pace him to the title.”

How do you think Gable Steveson would fair in the UFC? Let us know!