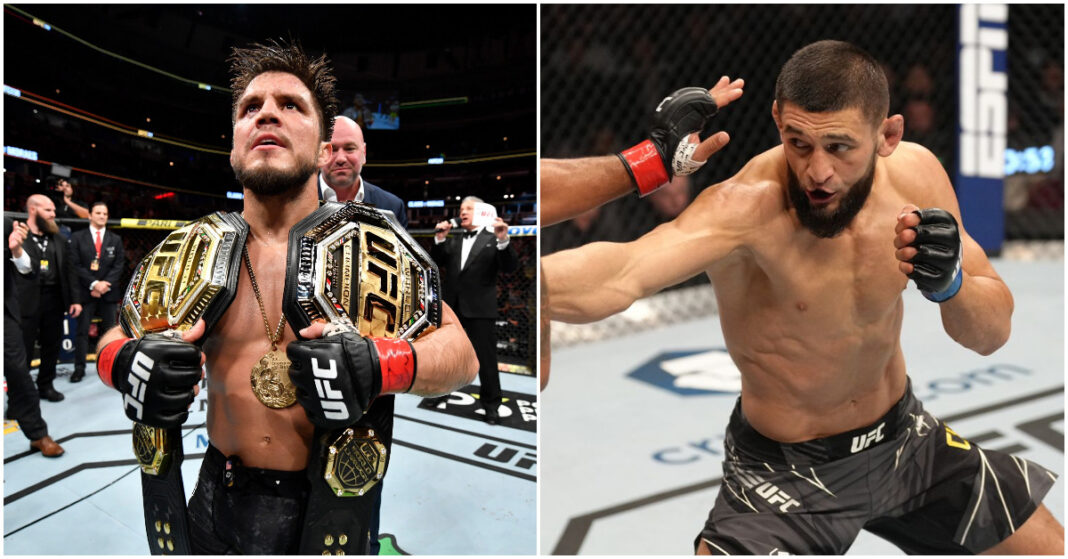 Former UFC two-division champion Henry Cejudo shared some pearls of wisdom for Khamzat Chimaev following his fight of the night performance against Gilbert Burns at UFC 273.

This past Saturday, one of the most anticipated fights took place at UFC 273. Khamzat Chimaev took on Gilbert Burns for three rounds in a closely fought contest that the ‘Borz’ won by unanimous decision. Living up to the hype, their bout was the fight of the night as both men went to war in what will be a fight of the year candidate.

For the first time in his career, Chimaev did not finish his opponent having either knocked out or submitted his previous ten competitors. It was also the first time he went past the second round in a fight. Burns proved his raw grit and turned the odds on their head by being the Chechen-born Swede’s toughest challenge so far.

In an interview with Helen Yee, Henry Cejudo shared his thoughts on the fight and advice for Khamzat Chimaev. When probed about Dana White comparing Chimaev’s rise to Conor McGregor and Ronda Rousey, Cejudo disagreed with the UFC president as he believes “it’s too early to say that”.

He prefaced his advice by showing his support for the Chechen fighter and saying that he’s “still a big fan”.

‘Triple C’ felt that Chimaev looked “human” in the fight. He mentioned the possibility of being overtrained, Cejudo said, “He looked overtrained,” before adding, “sometimes when people look really good, they look really good but then they get tired, it’s because they’re just overtrained. So that’s one of the advice I’d probably give is, ‘hey man, tone it down.’

“Just because you’re doing less doesn’t mean you’re doing worse, you’re not dedicated. This is a big mistake that all these fighters make.”

Henry Cejudo was surprised by Chimaev’s endurance and believed his performance was dictated by emotions, “I’ve also seen that when I see guys go through fights, like that, like what he just went through with Gilbert Burns, he’s emotional.”

“You can expose that. When someone’s emotional, it’s different. This is why you think of guys like Jon Jones, Demetrious Johnson, Saint-Pierre, the triple C. It’s like we know when we’re losing a round,” Cejudo continued, “I think with Khamzat, it was just fight, fight, fight. It was a fight because he brought the fight but doesn’t mean you always have to do that. So, I think he has to check his emotions.”

Cejudo has managed to stay relevant and become more of a fan favorite after retiring from the sport in May 2020. He’s settled into his role as a coach although he’s continued to express interest in a comeback fight. With detailed breakdowns of fights on his podcast, the ‘king of cringe’ knows the game inside out as a veteran of the sport.

Finally, Henry Cejudo believes the weight cut might have factored in the performance. Khamzat Chimaev revealed he gained roughly 20 pounds after stepping on the scale for the weigh-ins before the fight. Talking about the weight cut for the fight, Cejudo said, “Don’t get me wrong, he’s tough as nails and he can still do something special in the UFC but I think 170 pounds is too much of a weight cut.”