LowKickMMA.com
Home Other Has Chris Weidman Gotten Ahead Of Himself? 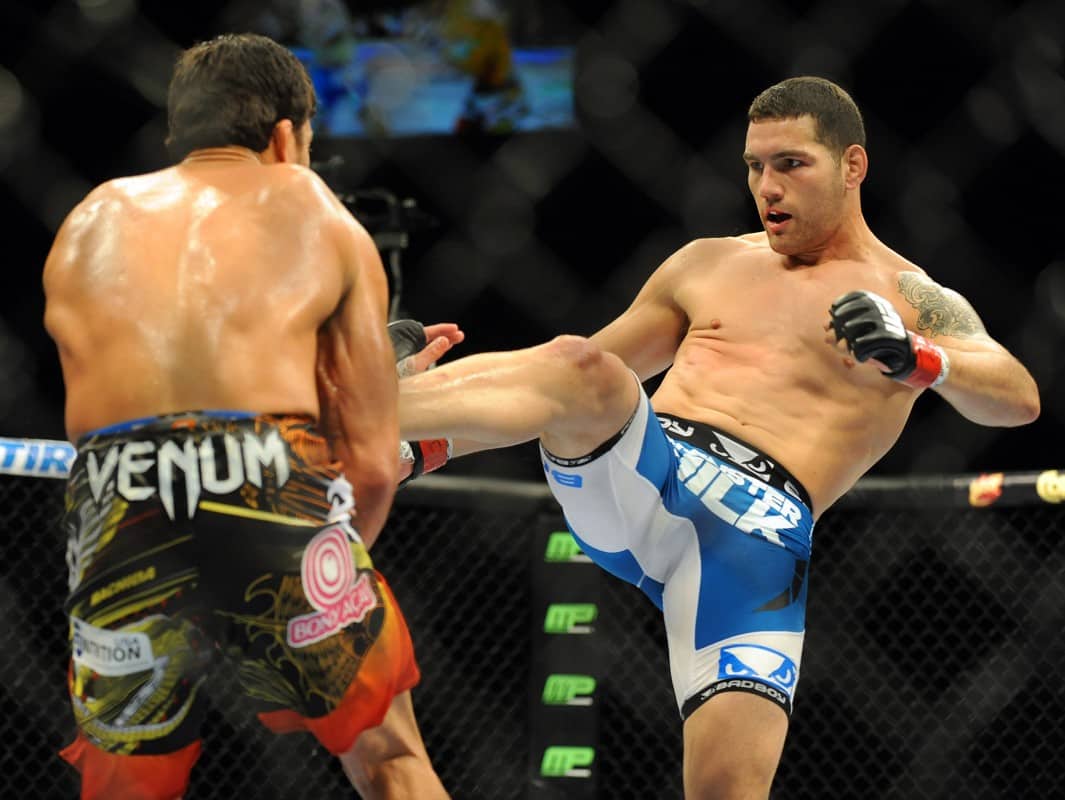 Despite all of the doubters and critics, Chris Weidman, in my opinion, has established himself as a true champion, and a rather dominant one at that. The Serra-Longo product has beaten Anderson Silva, the man many consider to be the greatest of all-time, twice, he edged out Lyoto Machida in a five-round thriller, and most recently scored a first-round finish over Vitor Belfort at May’s UFC 187.

Although he has suffered injuries quite often that may have hindered his activity, Weidman has proved he is the real deal, but has he gotten ahead of himself?

Yesterday (July 14, 2015), the champion made waves by passing comments on his division and even his future plans, saying that the middleweight division is just no competition, and that he foresees a move up to 205 pounds.

Of course having confidence and goals is perfectly fine, but to say the 185 pound division is no competition may be a little absurd, as Weidman has quite a daunting task in front of him if he truly wants to clear out the division like he has said.

Obviously the next step is a title defense against top-contender Luke Rockhold, which the UFC has already confirmed. Rockhold has improved immensely over the years, and may be the only fighter in the division who is just as well-rounded as the champion is, but that’s not all because Ronaldo “Jacare” Souza, and Yoel Romero are waiting in the wings after Rockhold as well.

“Jacare” is undefeated in the UFC, and is one of the best submission artists the sport has ever seen, leading many to think he also can challenge the champion. Romero has also looked phenomenal as of late, recently finishing former champion and title challenger Machida. “The Soldier of God” is a freak athlete, and a former Cuban Olympic Medalist, and he may be the man who can match Weidman in the wrestling department, not to forget about his brute power.

Now, I’m not taking any shots at Weidman, as I mentioned I’m not a doubter, and I’m actually quite a believer in my fellow New Yorker, but I’m also a realist, and I know he has a tough path in front of him, and those are three extremely tough fights.

Maybe Weidman is right, and he proves that the contenders are no competition, but I don’t think he can say that just yet. Once he gets through the murderer’s row set in front of him, it would be interesting to see Weidman move up to 205 pounds, but for now I believe he may have to settle down and focus on what’s right in front of him.

We have seen numerous champions over the past few years, including Anthony Pettis, Renan Barao, and Cain Velasquez talk about being unstoppable, and be billed as the next big thing only to get destroyed and lose their belt. This is something Weidman cannot do, or he may find himself in the same positon, without a belt wondering what happened.

In my opinion, Weidman has an opportunity to go down as one of the greatest fighters of all-time, especially if he can run through the challenges he has in front of him, but for me, he must do that first, then talk.