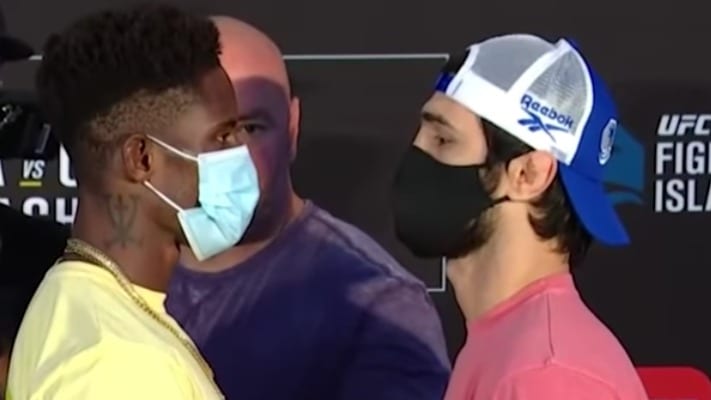 Opening up the UFC 253 main card is a featherweight encounter between Hakeem Dawodu and Zubaira Tukhugov.

Round 1: Dawodu is aggressive off the bat. A bit of a feeling out process follows before Dawodu lands a leg kick. Tukhugov is feinting and finally lands a left hook. They start to swing a lot more but both fighters show good head movement to evade each other’s strikes. Dawodu lands another leg kick and follows it up with a jab that partially lands. Tukhugov responds with a right hook that partially lands as Dawodu was getting out of the way. Dawodu lands a nice body shot. Not a lot of action in that round.

Round 2: Dawodu misses a leg kick. Both fighters look more aggressive in the second round. Tukhugov starts to find more success as he lands some rights and an uppercut. Dawodu lands a right of his own. Both fighters are standing in the center. Tukhugov lands another solid right. Dawodu lands an overhand right but Tukhugov responds with two quick strikes. Dawodu lands a body shot. They start to swing more before Tukhugov attempts a takedown. Dawodu defends well and they return to striking. Tukhugov goes for another takedown attempt and lands it this time. He lands some strikes and ends the round on top.

Round 3: Dawodu lands a leg kick. Not a lot of action to start this round as the referee urges both fighters to do more. Dawodu lands a body kick. Tukhugov aggressively goes for a takedown but Dawodu defends. Tukhugov is persistent but he sprawls and defends again. He lands a huge left hook on Tukhugov soon after. Tukhugov goes for another takedown attempt and has Dawodu up against the fence. Dawodu continues to defend well but Tukhugov switches to his back only for Dawodu to somehow escape! Dawodu lands a body shot and follows it up with a right hand. He starts to mock Tukhugov more and urges him to fight. Tukhugov just backs up for the rest of the fight.