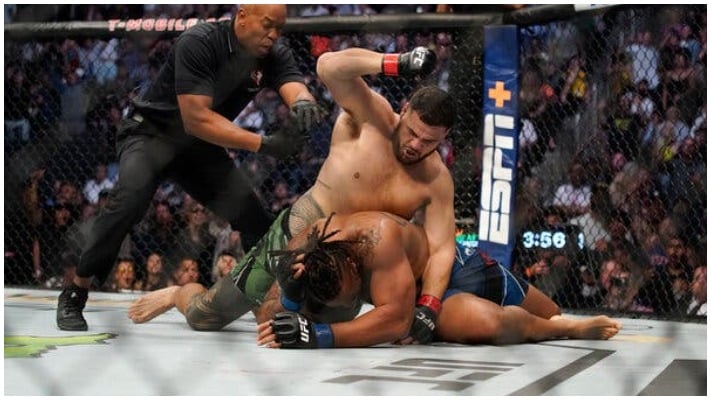 Greg Hardy has issued a statement to social media following his second consecutive defeat inside the Octagon.

The former NFL star was on the receiving end of a vicious knockout loss at the hands of Tai Tuivasa in the first round of their heavyweight match-up.

Hardy was looking to bounce back from a TKO loss at the hands of Marcin Tybura last time out. He seemed content to stand and bang with the Aussie puncher, even signaling he will be looking to hold the center at UFC 264.

The 32-year-old had Tuivasa hurt in round one and looked to close the show. As Hardy jumped in, he was caught with two big counter shots that dropped him hard. The Australian followed up with some ground strikes to close the show.

Hardy took to social media post-fight to react to his latest defeat.

“Talk n shit all 2021,” Hardy wrote on Instagram. “It’s mevsme I have to stop making rookie mistakes. There is not F N excuse for that Ish but my real ones know you can’t kill the kraken and you for damn sure can’t kill the prince. So bring it. I’ll be back. Thank you to the @ufc and good shit by @bambamtuivasa all respect and great win.”

It’s currently uncertain if Hardy will get the chance to rectify his “rookie mistakes” under the UFC banner.

Dana White seemed unsure about Hardy’s future with the company when speaking post-fight at UFC 264.

“Tonight was a big night for him. Tonight was a really big night,” White said at the UFC 264 post-fight press conference. “Tai Tuivasa would’ve been a real win for him, so yeah,  I don’t know what this means for him tonight.”

Hardy has had mixed results since joining the UFC in 2019. The controversial former professional football player has won four fights and also lost four fights inside the Octagon.

Do you think Greg Hardy has a future fighting in the UFC?