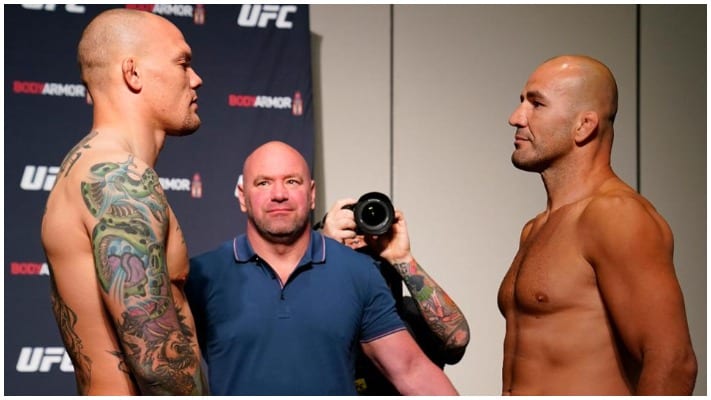 At the top of the bill, we have a fight with title implications in the light-heavyweight division. Former title challengers, Anthony Smith, and Glover Teixeira will go at it over a scheduled five rounds at the VyStar Veterans Memorial Arena in Jacksonville, Florida. The winner will be one step closer to earning another shot at long-time champion Jon Jones.

Round 1: Anthony Smith opens up with a big right hand that lands flush on Glover Teixeira. The Brazilian is trying to close the gap but is not able to do so yet – he eats another big right hand! Teixeira is tough he takes that punch and then another one. Teixeira has a brief moment of success backing Smith up to the cage and ripping some body shots in. Smith separates and lets his right-hand fly again – he can’t miss it at the minute. Glover punches Smith below the belt and the referee steps in to call a break in the action. ‘Lionheart’ takes his time to recover but he’s ready to go again. Smith is straight back to work cracking that right hand over the top. Teixeira lands three successive low leg kicks but Smith lets go of a four-five punch combo which Teixeira does well to roll with. Teixeira continues to threaten with the takedown but has refused to commit to anything fully yet. The round fizzles out with neither man landing anything significant.

Round 2: Smith has that right hand corked at the start of round two but it’s not landing as easy as it did in the first round. Teixeira is hammering in those lower legs kicks which will add up the longer this fight goes on. Smith backs Teixeira against the cage, lands a nice uppercut and throws a spinning shot. ‘Lionheart’ has taken some power off his right hand but continues to land it. Teixeira is blinking and backing up. Smith starts to put power on them again. He lands one and you can hear the crack! Glover’s eye immediately swells up and its almost shut. Teixeira backs Smith up against the cage as is letting his shots go. Smith looks hurt against the fence and is struggling to get out of the way. Teixeira smells it and starts to pour it on. Smith survives, they separate. Glover keeps the pressure on and continues to go after Teixeira right up until the horn sounds to end the round.

Round 3: Glover Teixeira lands a big body kick but its caught by Anthony Smith. Teixeira is down on the ground, Smith tries for a big hammer fist but misses and allows Glover back up to his feet. Teixeira hits Smith hard with an uppercut and Smith immediately grabs for his eye, he looks ready to go. Teixeira follows up with more shots to drop Smith who looks finished. Teixeira is reigning down ground and pound but the referee continues to let the fight go. Teixeira decided to try to take the back instead before working his way into the mount. He’s again throwing big strikes. Smith explodes to reverse the position and he’s somehow almost back to his feet! Teixeira secures the position and takes the back. Teixeira is throwing big hammer fists from the back and the referee is continually warning Smith to fight back and get moving. The round ends. Smith has somehow made it out of round three. WOW!

Round 4: Teixeira opens up with a HUGE uppercut. He’s picking up where he left off and is trying to finish Smith. ‘Lionheart’ proving his name right now, he’s still staying in there and throwing shots. He’s landing a few of his own but Glover just seems to hurt Smith with every shot he throws. Smith is backed up taking shots and dives desperately for a takedown. Glover stops it and takes the back, he’s throwing ground and pound for a while but ultimately lets Smith back to the feet. Both men are throwing bombs but Glover is hurting Smith who seems ready to go now. Teixeira amazingly shoots in for the takedown and again goes back to hitting brutal ground strikes. As the round draws to a close Teixeira slows down and focuses on maintaining position rather than trying to finish.

Round 5: Smith doesn’t really look like he wants to fight anymore. He immediately backs up to the cage and braces for more punishment form Teixeira. Smith shoots for a takedown and Glover falls in to mount. He begins letting off shots and the referee mercifully steps in to end the bout.