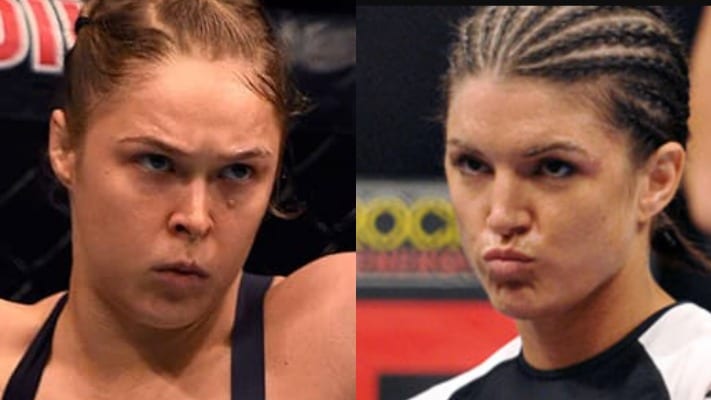 There was a good chance the mixed martial arts world may have seen a superfight between Gina Carano and Ronda Rousey.

Both fighters are regarded as pioneers of women’s mixed martial arts (MMA) and given their mainstream appeal, a fight would have done solid business for the UFC. Although Carano’s last fight was in Strikeforce in 2009, she revealed the UFC actually called her for a meeting in view of a potential fight with Rousey. And Carano was on board at first:

“”When Ronda Rousey became popular, they finally called for a meeting,” Carano revealed on Ariel Helwani’s MMA Show on Monday. “I walked in to a restaurant and there were big, muscly guys on the table in the middle of Hollywood and I remember thinking ‘what took you so long?’ They were like ‘okay, we’d love to offer you a million dollars. We’d love to have that fight.’

“And I was like ‘well, that sounds great. I’m going to need you to do me a favor. I’ve been acting now and I’m not active in any gym. So you’re going to have to give me some time to build a team which is not an easy thing. … You got to sit on this for six months, Dana.”

However, White didn’t seem patient enough. Carano detailed how she was pressured by the UFC head honcho to fight sooner which ultimately led to them falling out.

“… It was a nice dinner and we all left positive. I left stoked. Okay, this makes sense. This is my moment,” she added. “And then, the next day Dana was out there talking about me, talking about my name, telling people that they were going to sign me. And I don’t even have a team yet. I was like ‘that’s not what we discussed. You were supposed to give me at least six months to find a team.’ And then he started trying to put on the pressure through the media.

“It was a bummer because I told him over a text message that’s not what we talked about. I need time. … Then, he kept on doing that. I was still kind of searching for a team and feeling all that pressure. And then he sent me a text message that said, ‘this b*tch is something effing us around.’ I sent a text message back saying I think you sent that to the wrong person. And he said I don’t think I did. And that was the last conversation we had over a text message. Because I don’t think that was the kind of environment I wanted to come back into. So I just cut all communication after that text.”

Carano added that she later met with White who offered a genuine apology. However, by that time, the damage was done and Carano was firmly focused on acting.

What do you make of Carano’s revelations? Who do you think would’ve won a fight between Carano and Rousey?