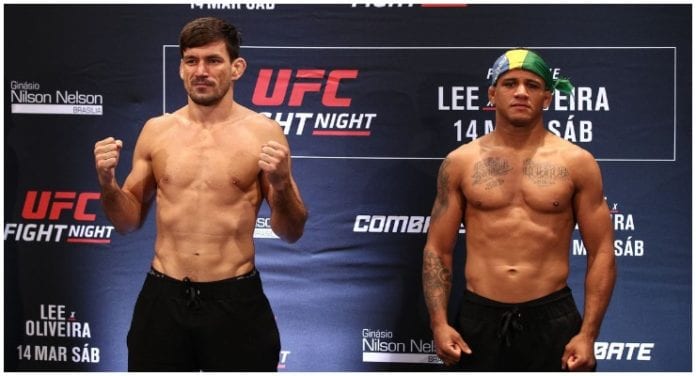 In the co-main event legendary submission specialist Demian Maia faces off against fellow Brazilian Gilbert Burns in a clash between two ranked welterweights hoping to push themselves into title contention.

Round 1: The fight starts with both fighters looking fairly tentative. Maia throws some straight strikes. Burns a couple of leg strikes. Maia grabs the leg and secures his first takedown of the fight. Burns works back to the feet but Maia refuses to let up putting his man against the fence before eventually taking the fight back to the mat. Burns slips out the back and impressively gets back to the feet. He uncorks a lead left hook which lands flush and drops his 42-year-old opponent. Burns begins to celebrate before following up with some ground strikes which force the referee to step in and call the fight.

OFFICIAL RESULT: Gilbert Burns def. Demian via TKO in round one