LowKickMMA.com
Home UFC News Germaine De Randamie Says It Would Be ‘An Honor’ To Rematch Amanda... 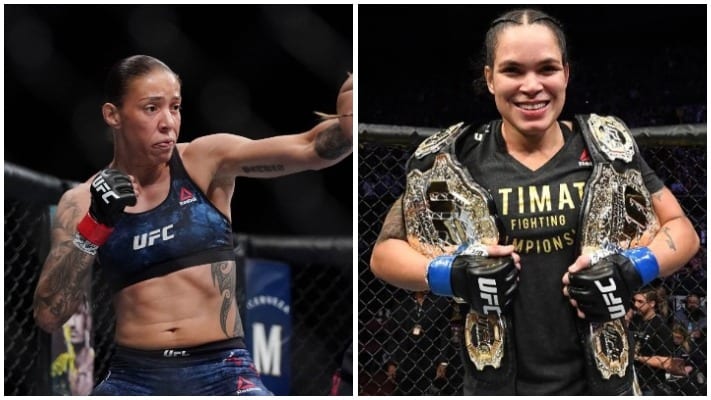 Germaine de Randamie would have no hesitation in signing the dotted line to face Amanda Nunes for the bantamweight title.

The former featherweight champion cemented her place as the next challenger for Nunes following a first-round knockout win over Aspen Ladd in their UFC Sacramento bantamweight headliner this past weekend.

Following the event, Chael Sonnen posted a video, pondering whether de Randamie would accept a fight with Nunes. The 35-year-old saw the video when she landed home in Holland and provided a straight-forward answer to “The Bad Guy”:

“When I landed in Holland, a couple of people sent me a video that Chael Sonnen did…he wanted to know if I’d accept a fight with Amanda—of course I would accept a fight with Amanda,” de Randamie told MMA Fighting’s Eurobash podcast. “Everyone knows, for me it would be an honor to be in the cage with such great champion. It would be honor to try to redeem [my loss to her].”

Nunes and de Randamie fought back in 2013 which saw the former win via TKO after taking her foe to the ground and finishing her with elbows. However, de Randamie feels both fighters are different now and a potential rematch won’t go the same way:

Nunes, in particular, has made huge strides and is now the bantamweight and featherweight champion. But despite her nine-fight win streak, de Randamie feels anyone can be beaten:

“I got the utmost respect for her. I said it the other day, there is no doubt about it, she is a true champion and she is one of the best ever. But everyone is beatable, I keep saying that,” she added.

Do you think de Randamie has the skillset to defeat Nunes?