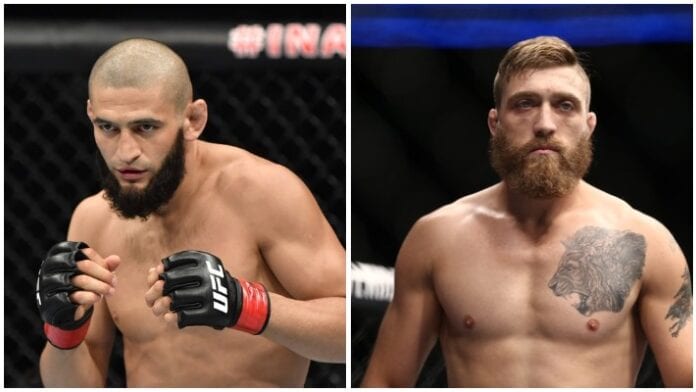 Gerald Meerschaert and Khamzat Chimaev were the stars of the UFC Vegas 11 press conference, and the pair made a bet for their anticipated bout.

In the lead up to the fight, Meerschaert has made it clear he believes it is disrespectful that Chimaev has two fights booked. Yet, the undefeated prospect didn’t seem to mind as he took some shots at Meerschaert and the fact he is a BJJ black belt. So, the veteran bet a black belt on it.

“If you choke me out, I’ll find a black belt and give it to you – how about that?” Meerschart said (via MMAFighting).

The two then continued to trash talk one another over the fact Meerschaert has 13 losses.

“You lose you your fights,” Chimaev interjected during Meerschaert’s first question. “You are like friend of Conor. What is his name? Artem Lobov. How many times you lose your fights?”

“You think you’re a black belt?” Chimaev said. “Jack Hermansson, he doesn’t have a black belt. Why did he choke you out?”

“Some times you lose when you fight tough guys, man,” Meerschaert said.

“I have blue belt,” Chimaev said. “I’m going to choke you out. … You’re about to give your black belt to me.”

The two then continued to go at it about who is the better grappler.

“I am tied for the most submissions in the middleweight division,” Meerschaert replied. “So yeah, I think I deserve that black belt.”

The prospect also believes if he finishes Meerschaert the veteran’s career is over.

“If I choke you out, you are finished with this sport,” Chimaev said.

Yet, if Gerald Meerschaert has to put a black belt on the line, he wants a trophy if he double legs the Swede.

“If I double-leg you, do I get, like, a wrestling trophy or something?” he quipped.

What do you make of their back-and-forth?