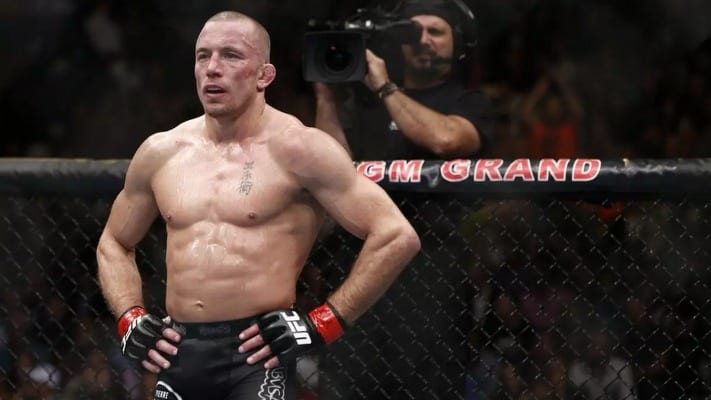 Georges St-Pierre and Khabib Nurmagomedov have both shown interest in fighting one another, but the Canadian doesn’t believe it will happen.

St-Pierre retired from MMA partly due to the fact the UFC would not book the fight. Now, however, Nurmagomedov has said he will retire at 30-0 and wants his final fight to be against GSP. Although it is a mega fight, Georges St-Pierre still is uncertain if the UFC will book it.

“It’s tempting, and I still train hard,” St-Pierre said to BT Sport (MMAFighting). “Now, it’s COVID, so it’s illegal to train combat sports here. I train hard, and I feel I’m at my best. But the fighter is always the last one to find out when your time is up. I don’t know.

Whether or not the UFC will book Georges St-Pierre vs. Khabib Nurmagomedov is uncertain. According to GSP, one roadblock for the fight is what weight it would be at. For the Canadian, he says his body can’t lose weight as it once could so cutting down to 155 might be out of the question.

“Khabib is fighting at 155, but I believe he’s heavier than me,” St-Pierre explained. “He walks around at a heavier weight. He’s younger than me, so he can fluctuate weight better. I’ve never been a fan of cutting weight, so I never did it. I mean, I lost weight, but I didn’t lose much weight compared to most of the guys. I’m afraid of the long-term consequences. And physically, I’m very fit. I don’t have a lot of water retention and fat when I’m around at my walking around weight.”

Would you want to see Georges St-Pierre vs. Khabib Nurmagomedov?